Brightline wants to open a train station at Disney Springs. The high speed train company is planning a two-story station with a lobby on the ground level and passenger facilities on the upper level.

ORLANDO, Fla. - Brightline plans to open a train station at Disney Springs in Orlando, the company announced on Monday.

With this station, there will be a convenient travel option between Walt Disney World Resort, the Orlando International Airport and several stops in South Florida.

The station at Disney Springs will include a lobby on the ground level, passenger facilities and an upper-level train platform. It will reportedly be close to Walt Disney World Resort’s four theme parks, two water parks and more than 25 hotels. An exact location has not been disclosed.

But why Disney Springs? 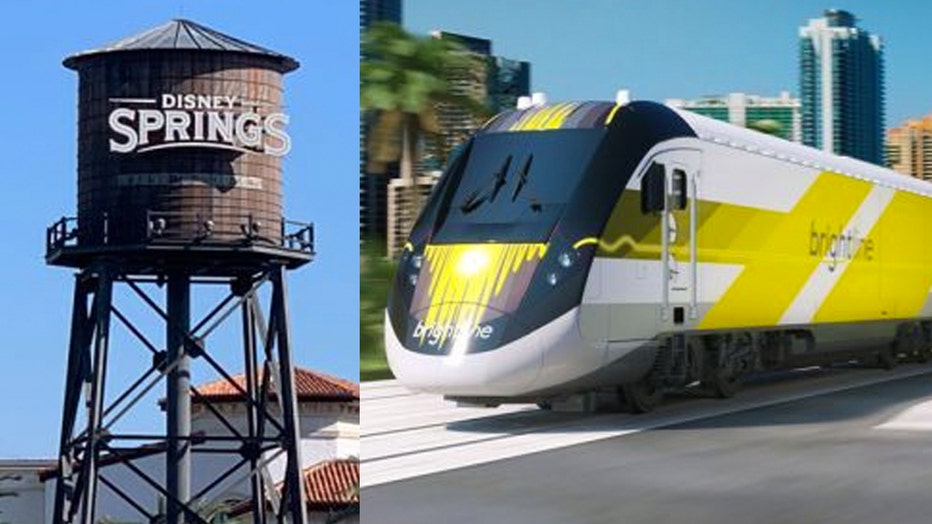 Brightline announced on Monday that they have reached an agreement with Walt Disney World to open a train station at Disney Springs. (Left photo by Getty Images, right by photo by Brightline)

Kubersky said you can get anywhere on property from Disney Springs via Disney’s transportation network.

Another reason: the entertainment district is close to Interstate 4.

“Whereas most of the other locations on Disney property are deeper into the woods, further off the I-4 corridor which the train will be using,” Kubersky said.

Brightline is said to be building train tunnels from South Florida to the Orlando International Airport, aiming to open in late 2022. Eventually, it reportedly wants to extend service to Tampa. This route is what is proposed to connect with SunRail and Disney Springs.

Brightline is using cutting-edge technology to build tunnels near Orlando International Airport for the high-speed trains. What would have taken a year to construct will now take just days.

“Brightline will offer a car-free connection to the millions of visitors from around the state and the world who plan to make Walt Disney World Resort part of their vacation plans,” said Patrick Goddard, president of Brightline. “Our mission has always been to connect our guests to the people and places that matter, and Walt Disney World Resort is a tremendous example of this.”

Disney Springs is near a major network of roads, including Interstate 4.

An issue may be funding. Orange County Mayor Jerry Demings says Brightline has been short on details, which he needs, if the company wishes to seek taxpayer investment.

“If there’s any request for local funding, or state or federal funding, then there has to be an abundance more of details that would have to come forward,” Mayor Demings said.

No timeline has been released on the opening of the Disney station. The South Florida to Orlando extension is scheduled to be done by 2022.