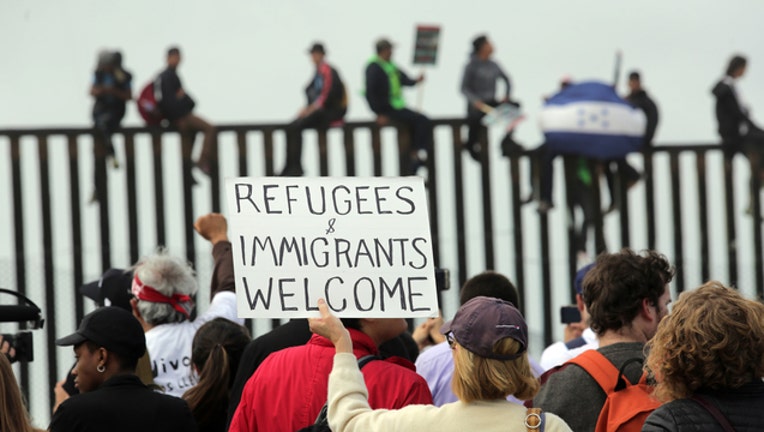 Pro-migrant caravan demonstrators rally at the west end of the U.S.-Mexico border as pro-migrant demonstrators climb the border wall from the Mexican side on April 29, 2018 in San Diego, California. (Photo by Bill Wechter/Getty Images)

(FOX NEWS) - Two groups of Central American migrants marched to the U.S. Consulate in Tijuana on Tuesday with a list of demands, with one group delivering an ultimatum to the Trump administration: either let them in the U.S. or pay them $50,000 each to go home, a report said.

Among other demands were that deportations be halted and that asylum seekers be processed faster and in greater numbers, the San Diego Union-Tribune reported.

The first group of caravan members, that included about 100 migrants, arrived at the consulate around 11 a.m. Alfonso Guerreo Ulloa, an organizer from Honduras, said the $50,000 figure was chosen as a group.

“It may seem like a lot of money to you,” Ulloa told the paper. “But it is a small sum compared to everything the United States has stolen from Honduras.”