TAMPA, Fla. - Leading up to the Fourth of July weekend, there was plenty of concern about the potential for travel and large gatherings to cause COVID-19 to spread. A group of data scientists has been studying people's movement since the pandemic began to see how it relates to the spread of the virus.

Through a process called "geofencing," researchers with the University of South Florida's Project ASPeCT study how the movement of individual mobile devices, particularly to crowded locations, correlates to hospital admissions. They were particularly interested in the Fourth of July weekend.

"We were very interested in understanding, would mobility be similar, would the movement be similar to that that we experienced for Memorial Day," said Dr. Matthew Mullarkey with USF's Muma College of Business.

Since March, the group has been analyzing three movements that impact risk: how far an individual mobile device travels in a day, the number of unique locations visited, and the number of dense locations visited. The data, collected through a third-party vendor, is anonymized so no personally identifiable information is revealed. 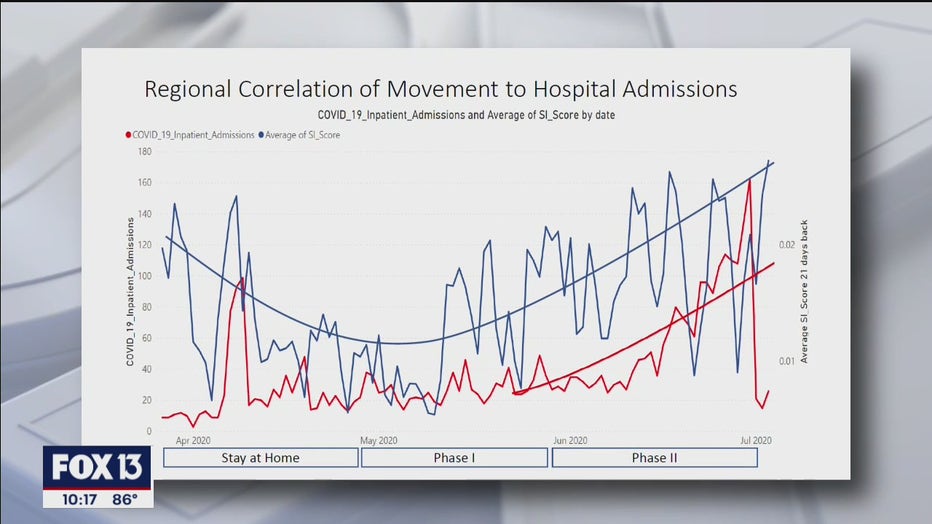 From the stay-at-home order to phases I and II, Mullarkey watched those three indicators, as well as hospital admissions, rise right through Memorial Day.

"And then, they stayed significantly high for the following four weeks," Mullarkey said.

But in the two weeks leading up to July 4th, there was a change. Dense location movement fell by 45% and unique locations visited fell by 20%, even as total movement was down by just 12%.

Mayors in South Florida gathered Tuesday for a round table discussion with Gov. Ron DeSantis and they warned the situation is getting much worse than they expected.

"It gave us some indication that maybe people in the Greater Tampa Bay area were taking some signal from these mask orders," Mullarkey said.

"Dense locations are most closely correlated with the admissions to our hospitals. That gave us some hope," Mullarkey said.

The head of USF medical school, Dr. Charles Lockwood, who's helping guide Hillsborough County's decisions when it comes to the coronavirus, was blunt in his concern about the rising number of hospitalizations and the ability to care for patients.

"If it did, maybe we will see a reduced pressure on hospital admissions in three weeks' time. Maybe we will see that trend flatten out and start to lower," Mullarkey said.

But if it didn't, "We would expect that hospital admits will rebound again and climb through 120 to 150 a day in 3 weeks time," Mullarkey said.

All of this data is Tampa Bay-specific so it wouldn't reflect the situation in cities like Miami or Orlando. The reason it's so important is, it can be a heads-up for the 52 hospitals in our 13-county region. As mobility increases or decreases, the hospitals can anticipate what impact it could have on their resources, and be able to plan two to three weeks ahead.