President Joe Biden spoke at the Tomb of the Unknown Soldier Thursday in commemoration of Veterans Day and the monument's 100th anniversary.

In honor of Veterans Day, a group of Democratic lawmakers is reviving an effort to pay the families of Black service members who fought on behalf of the nation during World War II for benefits they were denied or prevented from taking full advantage of when they returned home from war.

The new legislative effort would benefit surviving spouses and all living descendants of Black WWII veterans whose families were denied the opportunity to build wealth with housing and educational benefits through the GI Bill.

Since 1944, those benefits have been offered to millions of veterans transitioning to civilian life. But due to racism and discrimination in how they were granted through local Veterans Affairs offices, many Black WWII veterans received substantially less money toward purchasing a home or continuing their education.

A House version was introduced by Rep. Jim Clyburn of South Carolina, the Democratic majority whip, and Rep. Seth Moulton of Massachusetts. 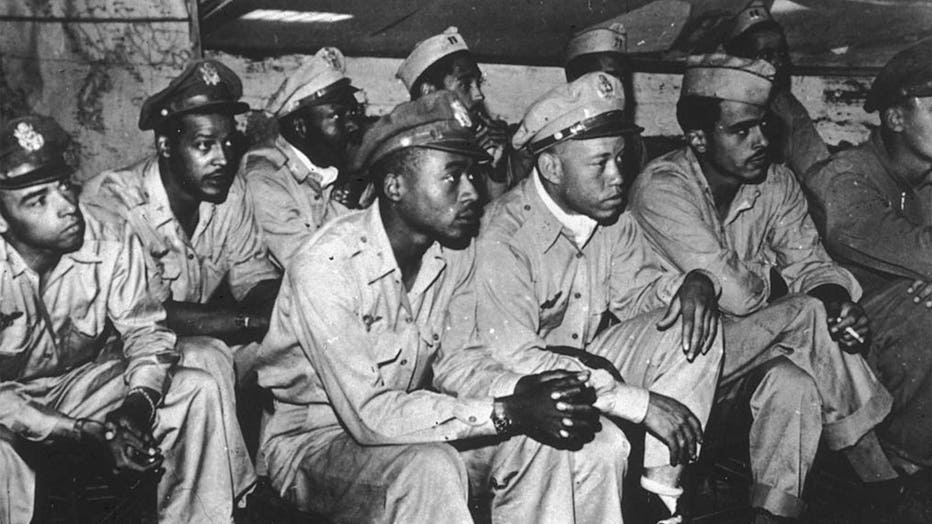 FILE - Pilots with the Mustang fighter group sit while listening to a mission briefing at a base in Italy during World War II, September 1944. ( Hulton Archive/Getty Images)

RELATED: VA program to help thousands of veterans learn new career after being unemployed due to COVID-19 pandemic

"This is an opportunity for America to repair an egregious fault," said Clyburn of the bill introduced last week. "Hopefully it can also begin to lay a foundation that will help break the cycle of poverty among those people who are the descendants of those who made sacrifices to preserve this democracy."

Moulton, a Marine veteran who served four tours during the Iraq War, said: "There are a lot of Black Americans who are feeling the effects of this injustice today, even though it was originally perpetrated 70 years ago."

"I think that restoring GI Bill benefits is one of the greatest racial justice issues of our time," he said.

A Senate bill was to be introduced later this month by Sen. Rev. Raphael Warnock of Georgia, the son of a WWII veteran.

"We’ve all seen how these inequities have trickled down over time," Warnock said, adding that the bill "represents a major step toward righting this injustice."

The legislation, authored by Moulton, would extend the VA Loan Guaranty Program and GI Bill educational assistance to Black WWII veterans and their descendants who are alive at the time of the bill’s enactment. It would also create a panel of independent experts to study inequities in how benefits are administered to women and people of color.

Lawrence Brooks, who at 112 years old is the oldest living U.S. veteran, was drafted to serve during WWII and assigned to the mostly-Black 91st Engineer General Service Regiment.

The Louisiana native, who has 12 grandchildren and 23 great-grandchildren, always believed that serving his country was the only way he could leave behind his life as the son of sharecroppers, said his daughter, Vanessa Brooks. 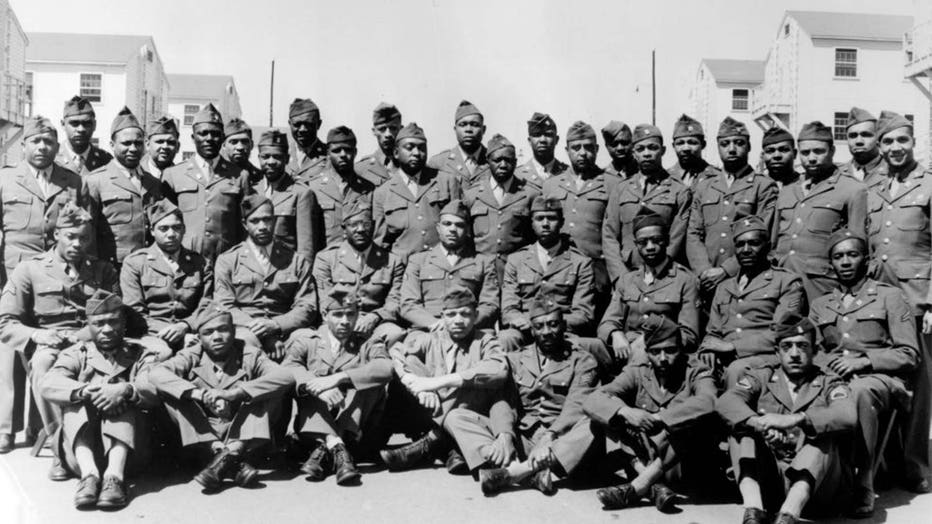 RELATED: ‘Make Camo Your Cause’ campaign brings struggle of homeless veterans to light

But after he was discharged in August 1945 as a private first class, he did not realize his dream of going to college, working instead as a forklift driver before retiring in his 60s. "He always wanted to go to school," his daughter said.

And when he bought his home, he used his retirement fund, not GI Bill benefits, she said.

President Franklin D. Roosevelt signed the Servicemen’s Readjustment Act into law in 1944, making generous financial subsidies available to 16 million WWII veterans pursuing higher education and buying their first homes. Irrespective of race, veterans who served more than 90 days during the war and had been honorably discharged were entitled to the benefits.

But after returning from the war, Black and white veterans faced two very different realities.

Because the GI Bill benefits had to be approved by local VA officers, few of whom were Black, the process created problems for veterans. This was particularly acute in the Deep South where Jim Crow segregation imposed racist barriers to homeownership and education.

Local VA officers there either made it difficult for Black veterans to access their benefits or lessened their value by steering them away from predominantly white four-year colleges and toward vocational and other non-degree programs. Meanwhile, the nation's historically Black colleges and universities saw such a significant increase of enrollment among Black veterans that the schools were forced to turn away tens of thousands of prospective students.

Sgt. Joseph Maddox, one of two WWII veterans Moulton and Clyburn named their bill after, was denied tuition assistance by his local VA office despite being accepted into a master’s degree program at Harvard University.

"When it came time to pay the bill, the government just said no," said Moulton, who himself attended Harvard on the GI Bill. "It actually is pretty emotional for vets who have gone through this themselves and, like myself, know what a difference the GI Bill made in our lives."

The bill is also named for Sgt. Isaac Woodard, Jr., a WWII veteran from Winnsboro, South Carolina, who was brutally beaten and blinded by a small-town police chief in 1946 after returning home from the war. The acquittal of his attacker by an all-white jury helped spur the integration of the U.S. armed services in 1948.

In contrast to the treatment of Black veterans, the GI Bill helped home ownership rates soar among white veterans in a post-war housing boom that created a ripple effect their children and grandchildren continue to benefit from today.

Of the more than 3,000 VA home loans that had been issued to veterans in Mississippi in the summer of 1947, only two went to Black veterans, according to an Ebony magazine survey at the time.

Preliminary analysis of historical data suggests Black and white veterans accessed their benefits at similar rates, according to Maria Madison, director of the Institute for Economic and Racial Equity at Brandeis University, who has researched the impact of racial inequities in the administration of GI Bill benefits.

However, because of institutional racism and other barriers, Black veterans were more limited in the ways in which they could use their benefits. As a result, the cash equivalent of their benefits was only 40% of what white veterans received.

After adjusting for inflation and for market returns, that amounts to a difference in value of $170,000 per veteran, according to Madison. Her ongoing research seeks to put a dollar amount on the wealth loss to Black families caused by racism and GI Bill inequities.

Black WWII veterans who were lucky enough to have gained full access to GI Bill benefits succeeded at building good lives for themselves and their families, said Matthew Delmont, a history professor at Dartmouth College. It’s a clear argument, he said, for why the new legislation is necessary.

RELATED: Tomb of the Unknown Soldier Centennial Commemoration: What you need to know

"Because the GI benefits weren’t distributed more evenly among Black veterans, we lost an entire generation of Black wealth builders," Delmont said. "After the war, we could have had even more doctors, lawyers, teachers and architects."

Dovey Johnson Roundtree, a Black woman who was a WWII veteran, attended Howard University's law school with GI Bill benefits. She then became a nationally known Washington criminal defense attorney who played a pivotal role in the desegregation of bus travel.

And WWII veteran Robert Madison, who served as a second lieutenant in the U.S. Army, credited his GI benefits for his success as a renowned architect.