Judge urges convicted killer not to represent himself in sentencing

TAMPA, Fla. - The trial was three years in the making, but after a few hours, a jury found Ronnie Oneal III guilty of the brutal murders of his 9-year-old daughter and the mother of his two children in 2018. His son barely survived the attack and lived to testify against his father at the age of 11.

Oneal sat quietly and did not appear to react as the jury foreman read the verdict at 7 p.m., just over four hours after deliberations began.

Ronnie Oneal, outspoken during parts of the trial, sits quietly as the verdicts are read aloud.

Earlier Monday, prosecutors began their closing arguments the same way they began their opening remarks: with the 911 call from 33-year-old Kenyatta Barron, Oneal’s girlfriend, as she pleaded for her life. Prosecutors said, by then, she had already been shot and, while the recording continued, Oneal can be heard beating her with a shotgun.

Oneal chose to represent himself. Much like his opening statements one week ago, he yelled as he spoke to jurors, saying his son's statements were inconsistent and he believes his son was likely coached by the Hillsborough County detective who later adopted him.

Ronnie Oneal - 'I did kill Kenyatta'

"I did kill Kenyatta Barron, but I want you to tell it like it is if you’re going to tell it," he said.

In the middle of the night in a Riverview neighborhood, neighbors woke up as the violent rampage took place. Soon after, first responders arrived at the gruesome scene. One neighbor testified saying he watched Oneal strike and shoot Barron. 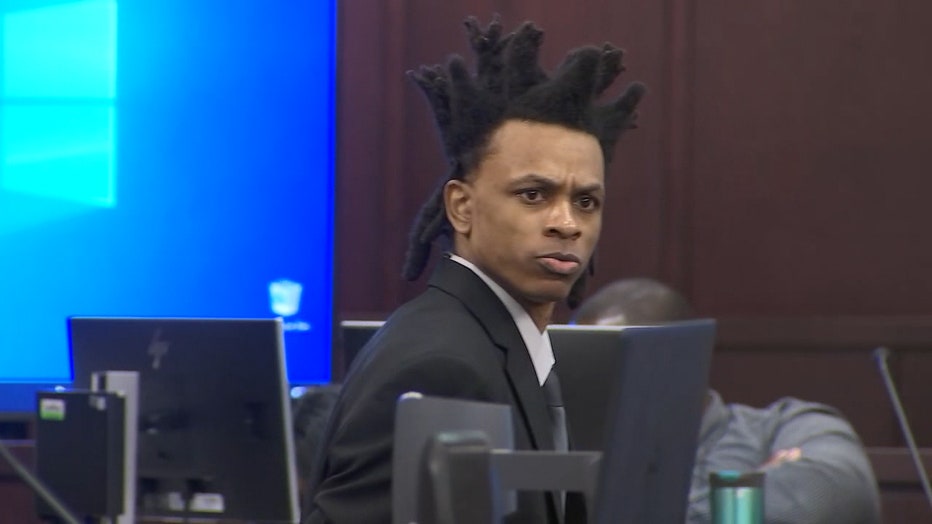 Her body was found outside her home. The young man witnessed Barron running for her life and described it in detail to the jury.

"His wife tried to run away and he went and he grabbed her and he stood over her striking her three times and he shot her," the man testified.

Prosecutors said Oneal used a hatchet to kill his 9-year-old daughter, Ron'niveya, who had special needs and could not talk.

One firefighter testified and recalled carrying the daughter's body out of the home.

PREVIOUS: 'They’re trying to kill me': Oneal's father recounts phone call from his son on night of murders

Oneal tried to fatally stab his 8-year-old son before setting him and the house on fire. The boy's name is also Ronnie, although he now has a different last name after being adopted by one of the detectives in the case.

Hillsborough County deputies testified that moments after their arrival, Oneal's son staggered out of the home, suffering from several stab wounds and severe burns.

The boy was just 8 years old when he said Ronnie Oneal, his father, attacked him after murdering his mom and 9-year-old sister. Now 11, he bravely faced his father today, recalling the night his family was killed and he barely survived.

One of the most gut-wrenching moments of the trial was when Oneal had the chance to cross-examine his son, three years after he tried to kill him.

The younger Ronnie testified remotely and described the tragic night. The state had him walk jurors through what he could remember. Later, Oneal had the chance to cross-examine his son.

"Did I hurt you that night of this incident?" Oneal asked.

"How did I hurt you?" Oneal continued.

"You stabbed me," the boy stated.

When it was now Oneal's turn to put on a case, he called a neighbor who asked that he not be publicly identified, and the judge ordered the media not to reveal his identity. The young man witnessed Barron running for her life and described it in detail to the jury.

With the conviction, Oneal faces the death penalty. That phase of the trial will start no sooner than Wednesday.

After jurors had left the room Monday evening, Judge Michelle Sisco commended Oneal on his competent defense but encouraged him to consider allowing a state-appointed attorney to take over for the next phase.

"As you are aware, it gets no more serious for any defendant in any criminal courtroom in this country than what you are facing now," she told Oneal, who nodded slowly. "I’m really going to strongly encourage you to consider allowing counsel to now step in and represent you."