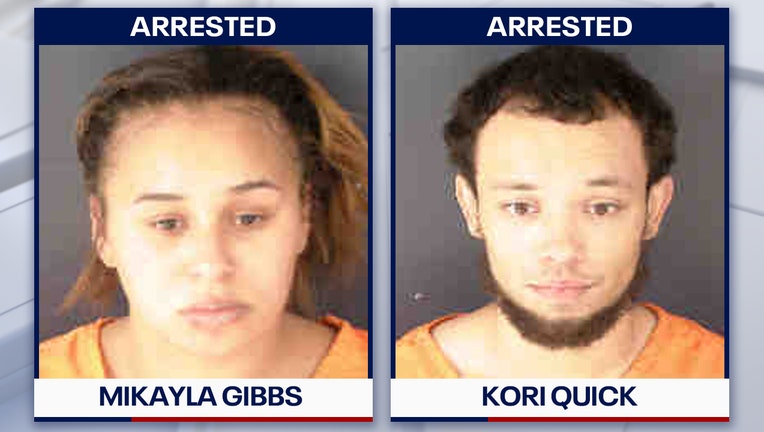 SARASOTA, Fla. - A fully-loaded gun was found in a stroller where an infant child was sitting, leading to the arrest of a Sarasota couple, police said Friday morning.

The arrest was a result of a reported assault that occurred Wednesday in the 2200 block of Ringling Boulevard in Sarasota.

Police said the victim, who was sleeping in a chair in an alleyway, told them he was threatened by two people who had weapons.

Police said the victim told them he saw the two individuals the day before when he was assaulted by Gibbs.

According to police, the victim went around the corner of a building to get his cell phone. Then, Quick followed him and started an argument before punching him.

The victim told police he used his cell phone to record the encounter. Then, when the victim was about to grab his backpack, he heard Gibbs ask Quick her for gun.

The victim ran away, but looked back and saw a gun in Quick's waistband, police said. The victim called 911 but Quick and Gibbs left the area.

However, the suspects were found a short time later with their infant child, who was born on March 4. Police said they were walking to their home in the 2000 block of Adams Lane in Sarasota.

A 9mm handgum was found underneath the stroller where the couple's infant child was sitting. Police said the gun was loaded with a round chambered.

Quick and Gibbs were taken into custody. The child was taken to Sarasota Memorial Hospital and then the Department of Children and Families took responsibility of the child.