MATLACHA, Fla. - A man in Sarasota has made it his mission to bring supplies to those in need of help after Hurricane Ian. He's brought more than $30,000 worth of supplies so far – all by boat.

Richard Dear loads up his trailer in Sarasota and heads South to the Burnt Store Boat Ramp in Cape Coral. Once there, he gets onto a boat and hauls everything from toiletries, oil, generators and tarps.

"To see such historical buildings and the culture wiped away in a moment is absolutely heartbreaking," Dear said.

Just Thursday, he brought over $10,000 worth of supplies, and Dear said it's all donated with everyone lending a hand.

Right now, Dear said his biggest focus is getting tarps on roofs. Places like St. James City and Matlacha still have no electricity or internet, leaving residents with no way to apply for federal programs that would help.

"It could really get horrible for them if it starts to rain again, and we don’t have their roofs dried in," said Dear. 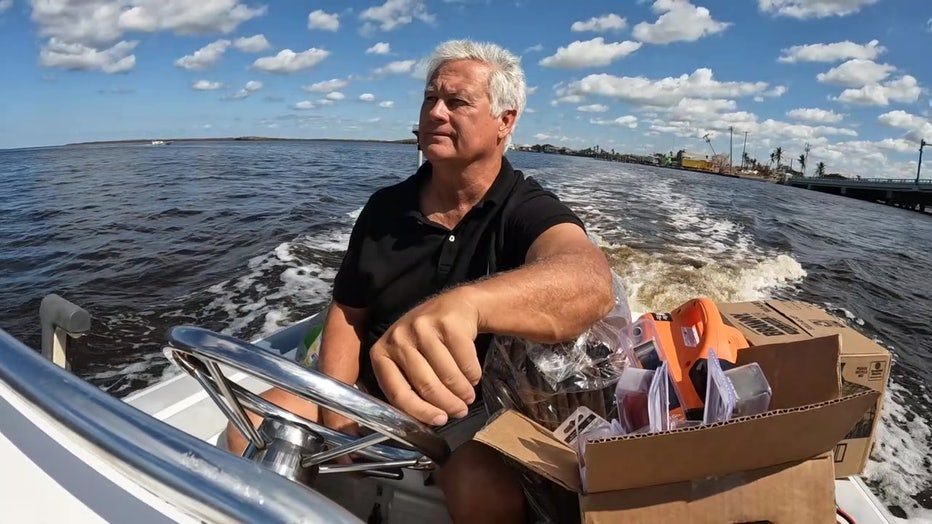 Supply runs to Knights Landing at Bokeelia are happening daily through Dear.

"It's unbelievable how much stuff he’s brought over here. He is a godsend," said Peter Lilienthal. "I had people crying when we were dropping off stuff at their homes."

"There’s a big need on Pine Island, and we are very happy for the people who are donating and contributing it to the island," said Steve Russell, a managing partner for Cabbage Key.

There is hope for places like Cabbage Key. On the island, only docks and trees seem to have sustained a brunt of the damage from Hurricane Ian.

"You can tell by the dollar bills here all hanging on the walls that we were all fortunate," said Russell.

Through the aftermath of the storm, hope remains as Dear and other boat captains load up and head south.

Dear created a GoFundMe for anyone who would like to help.