SARASOTA, Fla. - A couple of days after attending a meeting for work, Wilkinson Elementary School Principal Susan Nations was notified someone at that meeting tested positive for COVID-19. A few days later, she had symptoms herself.

"I started very mild symptoms shortly after that and self-isolated right away," the 55-year-old said.

Her symptoms were mild for more than a week before she began to decline.

"You hope you can start breathing on your own, but not being able to breathe as deeply as you normally do, it’s scary," she told FOX 13 News.

As it became harder for Susan to breathe, her doctor told her to go to Sarasota Memorial Hospital.

"You have to go through triage and your loved one has to leave you at the door, which is not easy," she recalled.

Nations spent the next eight days in a COVID-19 unit. She documented her experience on Facebook to let others know what the disease was like for her.

Doctors and nurses closely monitored her oxygen levels, which she said fluctuated enough for her to need extra oxygen. With their help and encouragement, Nations battled through every minute of the day. 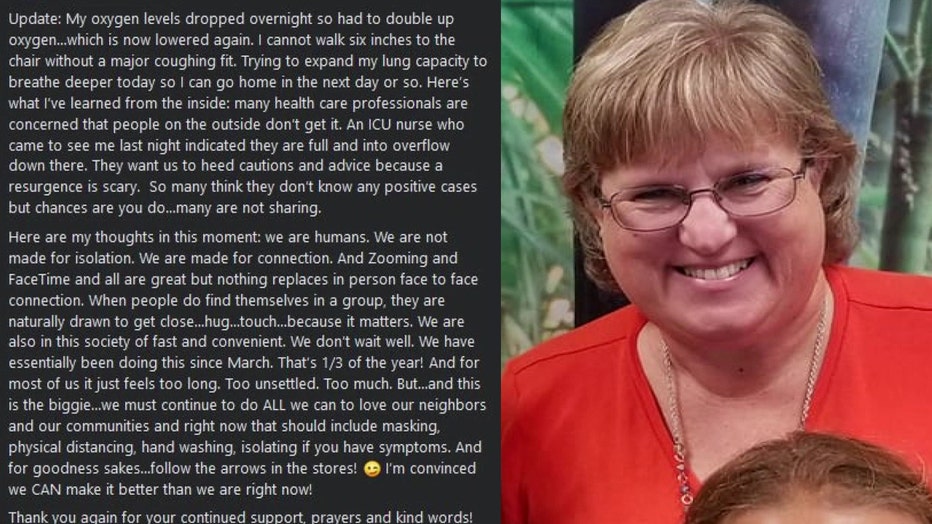 "You don’t want to be on a ventilator if you don’t have to be. That was in the back of my mind the whole time that I needed to fight that, and I was able to do it, so I’m thankful for that," she said.

On Monday, Nations was released from the hospital.

She's now at home under self-quarantine until she has a negative test for COVID-19. She's spending her time letting others know: this virus is no joke.

"I'm a healthy person. I don’t have underlying health conditions. I think I want people to know that the little thing of wearing a mask, washing your hands, maintaining your distance. I just believe so strongly that if our community would pull together that we can possibly flatten the curve and make a difference for others," she said.