A Central Florida boy received a birthday surprise of a lifetime when law enforcement officers buzzed his home on the ground and in the air.

SEMINOLE COUNTY, Fla. - Lights flashing and sirens blaring as deputies in Florida pulled into the Lake Forrest neighborhood in Sanford.

The Seminole County Sheriff's Office helicopter circled above. The pilot got on the loudspeaker with a special message, “Happy birthday, Skylar! Happy birthday, buddy!”

As Skylar Myers walked out of his house, he was in shock, complete disbelief that all the lights and noise were for him.

It’s his 12th birthday. His parents put a sign in front of their home that read, “Honk to wish Skylar a Happy Birthday.” 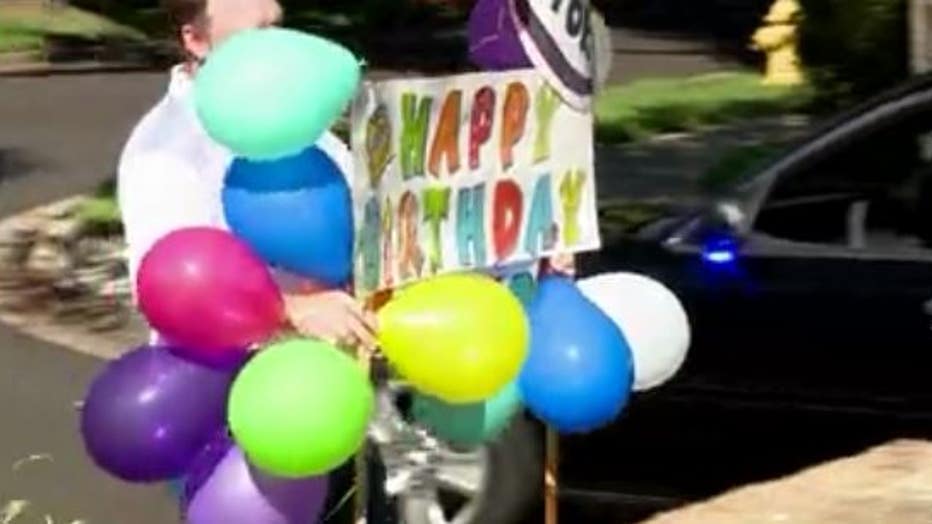 The deputies took things to another level.

“We wanted to make it special, so we came out and displayed some cars for him and wished him a happy birthday,” said Lt. Andrew Thomas.

Skylar’s mom, Rikki, says her son is typically very talkative, anything but shy, but the Seminole County Sheriff's Office had him speechless Monday morning.

“He was very overwhelmed. Very surprised these guys would come out and do this for us,” Rikki said.

While COVID-19 is a threat to all of us, it’s particularly dangerous for Skylar.

He was born with just half of a heart.

“He ended up getting a heart transplant on day six of his life.

"If you’re a transplant patient, your immune system is suppressed which means that you can get sick easier and if you do get sick, it hits you harder,” Rikki said, saying she has to pull him out of school if one of his classmates has a cold.

Three times a year, he goes to see a pediatric cardiologist for an EKG.

Once a year, Skylar goes to Pittsburgh for a heart biopsy.

Rikki says Skylar was really bummed that their trip for his birthday couldn’t happen because of the statewide stay-at-home order and that he couldn’t hang out with his friends.

A guided tour of a marked squad car, an undercover car and a couple of motorcycles from his heroes - all while practicing social distancing made up for that.

Skylar stood in his driveway waving goodbye, saying thank you to the deputies as they pulled away with their lights and sirens going.

Then, he called his cousin and told him about his big surprise.

“I had policemen show up for my birthday, like 10-12.  They even had a helicopter that said happy birthday,” Tyler said while grinning ear-to-ear.