A series of winter storms brought heavy snow and closed key highways in parts of the western United States, with forecasters warning of more wintry weather ahead.

Accumulating snowfall, bitterly cold temperatures and gusty winds were forecast for the western U.S. and northern Plains through Monday night, according to the National Weather Service — which added that a "wintry mixture" was also expected to move into portions of the Northeast throughout the day.

The NWS’ Storm Prediction Center said significant snowfall will continue for portions of West Coast mountain ranges and the Intermountain West, while parts of the West Coast will see record cold temperatures. The Sierra Nevada Mountains are expected to receive another 1 to 2 feet of snow, with totals up to 3 feet in the highest elevations, forecasters said. 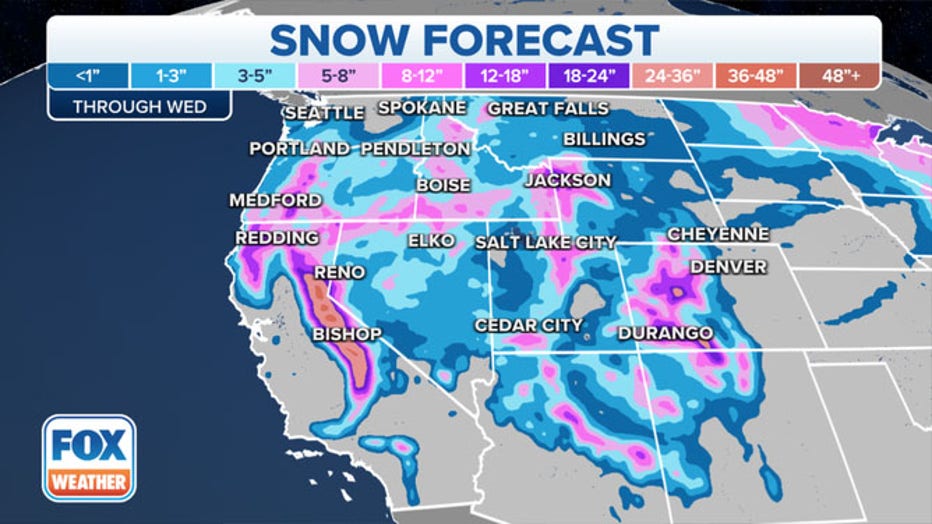 Several feet of snow was expected to fall in the highest elevations through Wednesday. (FOX Weather)

In the Wasatch and Colorado Rockies, snow totals could be between 8-12 inches, with some areas picking up an additional 2 feet of snow by the time the system moves out of the region.

A pair of storm systems will also bring snow and an icy wintry mix to the Upper Midwest, Northern Plains, Great Lakes and the Northeast, the NWS said.

Meanwhile, a major Christmas weekend storm caused whiteout conditions and travel headaches in the mountains of Northern California and Nevada. Plumas County Search and Rescue shared footage on Sunday of several vehicles that were stranded on California’s Gold Lake Highway during storm conditions.

"All state highways through the northern Sierra" were closed amid "winter storm conditions," Plumas County Search and Rescue said.

Authorities near Reno said three people were injured in a 20-car pileup on Interstate 395, where drivers described limited visibility on Sunday. Further west, a 70-mile stretch of Interstate 80 was shut until at least Monday from Colfax, California, through the Lake Tahoe region to the Nevada state line.

The California Department of Transportation also closed many other roads while warning of slippery conditions for motorists.

"Expect major travel delays on all roads," the National Weather Service office in Reno, Nevada, said Sunday on Twitter. "Today is the type of day to just stay home if you can. More snow is on the way too!"

The weather service issued a winter storm warning for greater Lake Tahoe until 1 a.m. Tuesday because of possible "widespread whiteout conditions" and wind gusts that could top 45 mph.

Overall, San Diego to Seattle saw turbulent weather over the weekend. More than a foot of snow was reported near Port Angeles on Washington state's Puget Sound. Portland, Oregon received a dusting, but the city was expected to get another 2.5 inches by Monday morning, according to the weather service.

The continuing storms were welcomed in parched California, where the Sierra snowpack had been at dangerously low levels after weeks of dry weather. But the state Department of Water Resources reported on Christmas Eve that the snowpack was between 114% and 137% of normal across the range with more snow expected.

Up to 8 feet of snow was predicted at the highest elevations of the Sierra.

Before Sunday, 20 inches of snow already had fallen at Homewood on Lake Tahoe’s west shore. About a foot was reported at Northstar ski resort near Truckee, California, and 10 inches at the Mount Rose ski resort on the southwest edge of Reno.

Northstar said Monday it would close due to blizzard conditions.