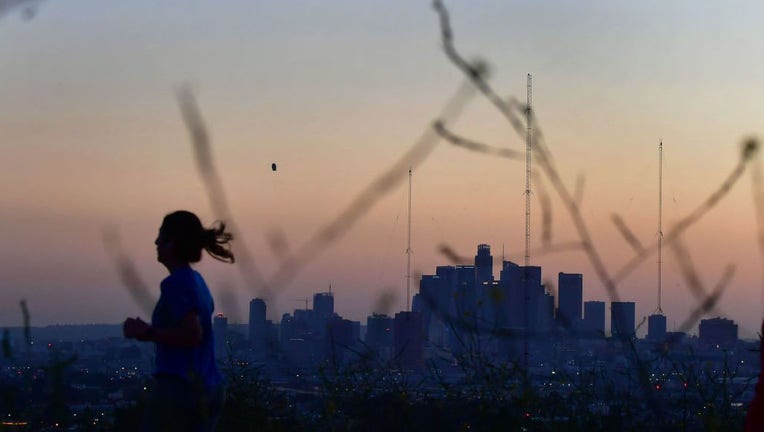 FILE - A woman jogs in a Los Angeles park after sunset on April 6, 2022, in Los Angeles, California. (Photo by FREDERIC J. BROWN/AFP via Getty Images)

The findings, published this month in the British Journal of Sports Medicine, were consistent across all types and stages of breast cancer — prompting the researchers to recommend a stronger focus on exercise as a preventative measure.

The study was led by the nonprofit Cancer Council Victoria in Australia and included a team of cancer researchers from institutions worldwide, including in Australia, the U.K., the United States, and Canada.

Observational studies have shown that a lack of physical activity and overall sedentary behavior is linked to a higher risk of breast cancer, but such a correlation could also be subject to biases, and proving cause and effect is more difficult.

As a result, the research team used a statistical method called Mendelian randomization, which involves a person’s genetic variants. A human’s genes are passed on randomly each generation, which influence how much we eat, sleep, drink, exercise, and more. These genetic influences are not impacted by lifestyle choices made by an individual over the years.

Given this, scientists can look at genetic variants for a particular risk factor — in this case, lifelong physical activity levels and sedentary behavior — to try and establish cause and effect.

"A stronger cancer-control focus on physical activity and sedentary time as modifiable cancer risk factors is warranted, given the heavy burden of disease attributed to the most common cancer in women," Lynch added.

October raises awareness for Breast Cancer and LiveNOW from FOX talks with a doctor about the advances in treatments and importance of early detection.

In this study, the research team assessed whether lifelong physical activity and sitting time might be causally related to breast cancer risk in general, and specifically, to different types of tumors.

They used data from participants of 76 different studies under the Breast Cancer Association Consortium (BCAC), a forum of scientists studying the inherited risk of breast cancer. The data included nearly 131,000 women of European ancestry.

The researchers drew on published studies from the UK Biobank on how genes can influence our physical activity, vigorous physical activity, or sitting time. The team also estimated the participants’ overall breast cancer risk, based on whether they had gone through menopause, and by cancer type, stage, and grade.

Analysis of all the data showed that a higher overall level of genetically-predicted physical activity was associated with a 41% lower risk of invasive breast cancer, and largely regardless of menopausal status, tumor type, stage, or grade, the study said.

Similarly, genetically-predicted vigorous physical activity for three or more days of the week was associated with a 38% lower risk of breast cancer, compared with no self-reported vigorous activity. These findings were consistent across most of the case groups, the team found.

Furthermore, a greater level of genetically-predicted sitting time was linked to a 104% higher risk of triple-negative breast cancer, the team said.

RELATED: Biden hopes ending cancer can be a 'national purpose' for US

The team noted how more physical activity and low sedentary time can decrease breast cancer risk by decreasing fat in the body, which can improve metabolism, benefit sex hormone levels, and decrease inflammation.

"Mechanisms linking sedentary time and cancer are likely to at least partially overlap with those underpinning the physical activity relationship," the researchers noted in the study.