A new approach to vaccine verification became available in the form of a card called the Smart Health Card. The card was developed by the Vaccination Credential Initiative.

WASHINGTON - As the spread of the omicron variant of COVID-19 adds to the uncertainties of the ongoing pandemic, many businesses are requiring customers to provide proof of their vaccination status.

Multiple states are considering the development of vaccine passports which is a digital tool that can be used to show proof a person is vaccinated.

But a new approach to vaccine verification is now available in the form of a card called the Smart Health Card. 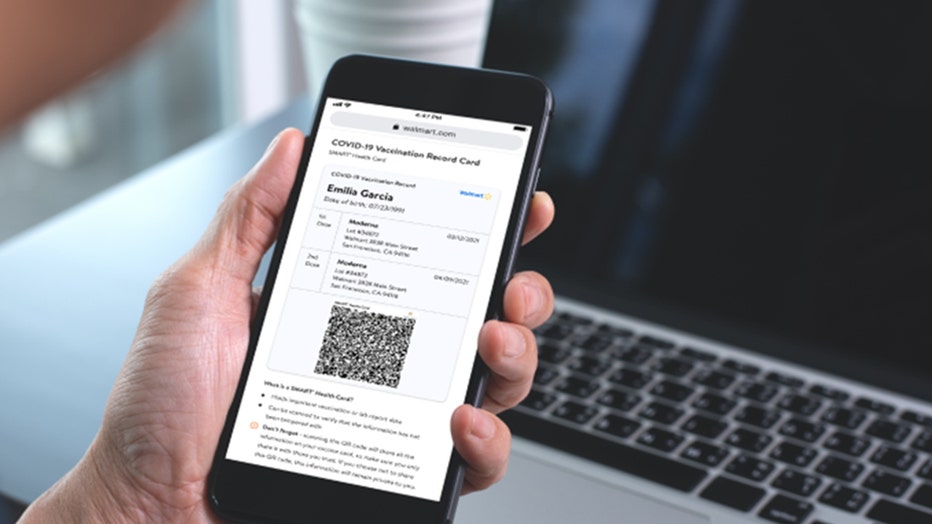 A person uses the SmartHealth Card to access their vaccine status on their phone. (Photo courtesy of the MITRE organization/Walmart)

The card was developed by the Vaccination Credential Initiative (VCI), a voluntary coalition of over 800 public and private organizations that collaborated to create a free and open way for people to access and verify their vaccination status.

Dr. Brian Anderson is the co-founder of the VCI and the chief digital health physician with the MITRE Corporation.

Anderson suggested that the Smart Health Card may be used as a design for states to develop a vaccine passport.

"Smart Health Cards can best be understood as an open-source standard by which individuals can have a trustworthy verifiable copy of their vaccination status. It’s a way by which individuals can have a digital copy or a paper copy. It’s all on a QR code that you can share on your smartphone or on a paper copy itself out of your wallet," Anderson said.

"We started this effort back in January and it was a group of 12 companies and health systems coming together wanting to develop a free, open-source way for individuals to have these kinds of records and to not enable the kinds of technology that lead to commercialization or locked in IP. We believe really that it was about empowering individuals freely and openly if they choose to have these kinds of cards," Anderson stated.

California, New York, Washington, and Louisiana are among more than 20 states using the Smart Health Card. But obtaining a card depends on that state’s identity verification process. For example, if a person is vaccinated, the state would have a vaccination record containing the individual’s name, date of birth, email address, or phone number.

"Any one of those identifiers would be part of a request that you make to the state via one of these portals and then if you put in the right information and it matches the record that the state has then you would be able to get a Smart Health Card. You need to have the vaccination record and then be able to prove who you are to get one," Anderson says.

Anderson believes that states collaborating with the VCI are using the Smart Health Cards concept as a framework to launch their own version of a vaccine passport.

"We’re already seeing today 20-plus states that are working within the VCI coalition of states here in the U.S. that are adopting Smart Health Cards as a framework to do exactly as your describing. So setting up the kind of portals that have been launched already by many states like California, New York, Washington, Louisiana, and others. So many more states we anticipate will be using this kind of service," Anderson says.

"I think it’s important to mention that you can use it today for vaccination credentials but again what VCI is about and what those in the coalition are about is why we have rallied around this standard because it’s easily used for things other than your vaccination record."

"The first step is there is a level of encryption between the health data that’s displayed in the QR code and the issuer signing that. Such that it is easily verified that the data is true that it’s not tampered with because of that encryption of the QR code,"Anderson states.

"Secondly, from a privacy perspective, Smart Health Cards were intentionally designed to have a minimal amount of data. Meaning it was designed to include things only like your name, your date of birth, the vaccine manufacturer, and where you got it from. It’s not your whole health record," Anderson says. "So we’re trying to ensure that once privacy is maintained, because there is a minimal amount of data on it, and we’re ensuring that it’s cryptographically secure because of the encryption of the QR code so that you can’t have fraudulent cards out there."

Philadelphia and Los Angeles are among some cities requiring customers to provide proof of their vaccination status to eat in restaurants, attend venues, and visit gyms.

Philadelphia announced a new vaccine mandate on Dec. 13 for indoor dining establishments that will go into effect just on Jan. 3, 2022. The order applies to places where people can eat together indoors including restaurants, bars, sports venues that serve food, catering halls, and movie theaters.

In New York City, employees of businesses are required to show proof of vaccination to their employers starting on Dec. 27. Under the vaccine mandate, employers must post a sign by the Dept. of Mental Health station of the requirement by Dec. 27. FOX 5 New York reports that employers have to keep a record of each employee’s COVID vaccination status and a record of any "reasonable accommodations provided."