Governor Ron DeSantis was at the High Point neighborhood to announce the new site, where residents are least 55 years old. He said the community will offer 2,250 doses over the next three days. Two-thirds of that will be administered for High Point residents and the other 750 will be provided through the county.

DeSantis said the purpose was to raise the percentage of vaccinated seniors in Hernando County. Vaccine distribution information for Hernando County residents can be found here.

"In terms of vaccinations for seniors, Florida is doing very well," DeSantis said. "At the same time, not every county is doing the same. Hernando County, as of earlier this week, was in the bottom five of percentages of seniors who have been vaccinated in the state of Florida. So, we said we're going to do something about it."

"I think this will make a big impact," he added.

He reminded residents that the county is administering 3,000 shots in arms every week at the Hernando County Fairgrounds.

The state has opened several pop-up vaccination sites throughout Florida and in Tampa Bay. The most recent was in Pinellas Park's Mainlands of Tamarac community, also a neighborhood where residents are at least 55 years old.

The sites, the governor said, use the state's supply of vaccines, not the county's. 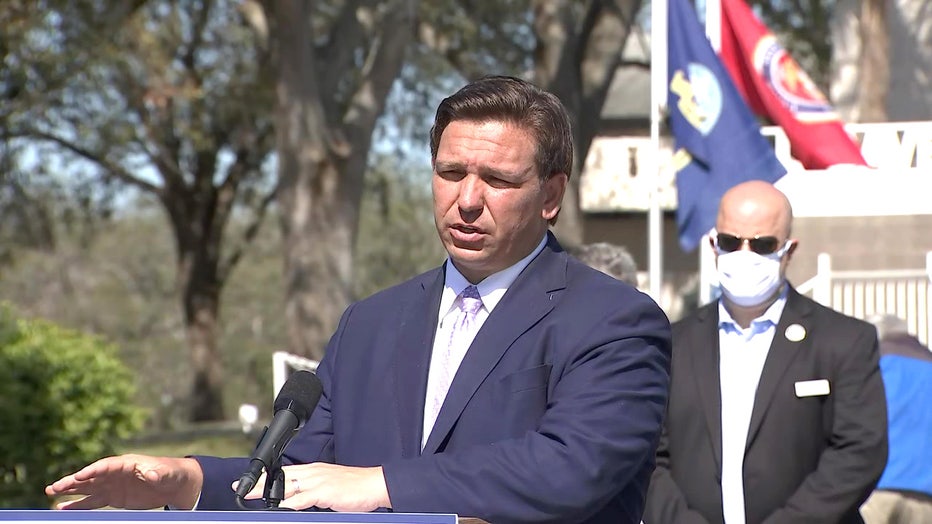 Last week, the governor stopped in Manatee County to announce a vaccine pop-up site. He also addressed the controversy over the program, which some say highlighted ZIP codes that were high-income and in the "whitest and richest" Lakewood Ranch.

DeSantis argued the locations were chosen because of a high concentration of seniors.

Following his comments, Rep. Charlie Crist of Pinellas County called for the Department of Justice to investigate DeSantis' vaccine distribution plan, in which DeSantis called the accusations a "joke" on Wednesday.

"There are some people who are more mad at me for vaccinating seniors than they are at other governors whose policies have killed seniors," he said, presumably referencing the controversy in New York. "And that is a joke."

On Tuesday, the governor also hinted that the four federally-supported sites opening next week may provide doses to law enforcement officers and teachers who are at least 50 years old.