DOVER, Fla. - A Hillsborough County business, around for decades, is being forced to count down its final days. Harold's Feed & Pet Supply in Dover will soon be brought to the ground as part of a planned state road expansion.

Signs that read "Store Closing" and "Total Liquidation" are popping up at the business at Martin Luther King Jr. Blvd. and McIntosh Rd. The owners of this community staple say they feared this day would come and fought hard to stay. Now, they're making the most of their last days and plotting their next move.

At Harold's, there's animal food, raw honey, live chicks, grills and propane, just to name a few items. "We have a little bit of everything in here," said owner, Rhonda Burnette.

It's been open since 1972. Bill and Rhonda Burnette bought it from Harold himself, more than two decades ago.

"Since that point to today, we've probably almost quadrupled its volume," Bill said.

"We give all the kids a lollipop and so, they all love coming to Harold's," said Rhonda Burnette.

This week, the writing is on walls. Big signs outside tell customers that the store's days are numbered.

"When I became aware of the project was in 2001," Bill Burnette said. "It really got close to heart 5 1/2 years ago. We were told that the road would be coming." 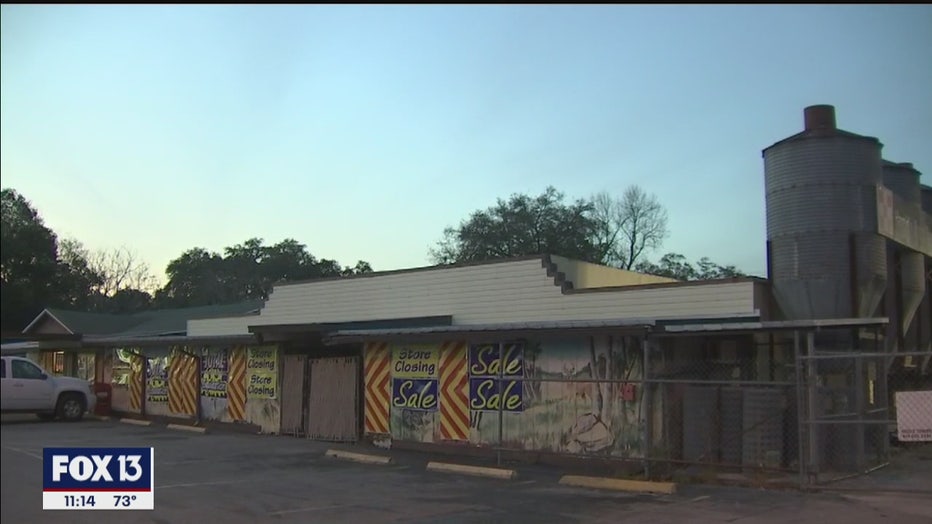 The Florida Department of Transportation is planning to reconstruct a 2.4-mile segment of State Road 574 from east of Kingsway Road to east of McIntosh Road, widening from two to four lanes. The proposed road would be upgraded with raised medians, bike lanes on both sides of the road, a sidewalk on the north side of the road, intersection improvements at Valrico Road and McIntosh Road and replacement of a low-level bridge.

It comes with a $4.7-million design cost and a $26-million right-of-way cost. Harold's is in the way.

"You hear about eminent domain, you never think it's going to happen to you," Rhonda Burnette said.

After years of legal battles, and finally reaching a settlement, the store is soon to be gone. "Their engineers said there has to be a pond on this site so they took the whole site."

FDOT tells us that under Florida's eminent domain laws, they pay all attorney and court fees, moving costs, as well as the property value for land taken. However, under the law, the state only compensates for "business damages" when partial property is taken. In this case, the entire property is being taken.

"If they take your whole business, they should still be able to pay your business expenses and other costs that are incurred in relocation and moving your business, not just property value," Bill said.

They're closed until Thursday. Then, they'll begin liquidation, hoping to sell the entire inventory. Encouragement from loyal customers keeps them going.

"Seeing the store closure signs, seeing the 'everything must go signs,' that's a heart breaker," Bill added. "We know that there is something on the horizon. We are just waiting to see what it is."

The road project is expected to begin in 2022.