Future of the Rays

TAMPA, Fla. - Mayor Jane Castor and the Tampa Bay Rays president are weighing in on the team's future and the possibility of a move to Ybor City. The remarks came during a ribbon-cutting ceremony Saturday for a new multi-purpose ball field in West Tampa.

A new multi-purpose ball field in West Tampa has been more than a year in the making. It's a field the community can now use to play both softball and baseball. It'll all started after 10-year-old Evangeline Iarossi wrote a letter to Mayor Jane Castor about the need for more softball fields throughout the area.

"I just realized that, like, it's not fair that there are so many baseball fields and only one softball field at my little league so I thought I'd write to the mayor because she was a formal sports player and she's a girl so she kind of like knows the problems," Iarossi said.

Her letter was used by the city to help secure a Youth Sports and Play grant from The Walt Disney Company and The National Recreation and Park Association. The grant helped fund the conversion of the third of four diamonds to become a multipurpose softball field, additional ADA parking and the re-institution of an official Girls Softball program at West Tampa Little League.

"We were able to bring this facility up to the condition that you see today so that all of these kids will be able to have a place where they can play ball," Castor said. 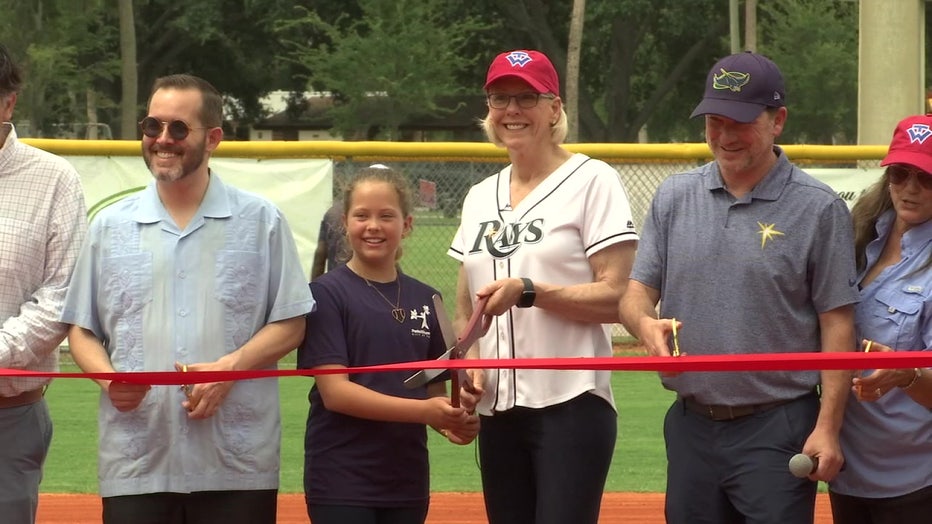 As part of the opening, players with The Tampa Bay Rays along with President Brian Auld hosted a special baseball and softball clinic. It comes as the team contemplates a possible move to Ybor City.

"We know this is our long-term home. Don't know exactly how that's going to work out yet, but we're really excited to figure out that future together. And I couldn't be more grateful both to Mayor Castor and Mayor Welch for the leadership that they're showing on that issue," Tampa Bay Rays President Brian Auld said.

READ Tampa, St. Pete mayors say Rays need to decide where their future home will be

In February, county commissioners discussed plans for the possible move citing a study by the Tampa Sports Authority which found it would cost around $799 million to build a new stadium on Palm Avenue in Ybor City.

"We haven't made a lot of progress on that, but we feel very confident that the Rays will stay in the Tampa Bay area. We're working very closely with the organization to do all that we can to make sure the Rays stay in Tampa Bay," Castor said.