Antonio Brown hasn't been arrested yet

On Thursday afternoon, Tampa police tried to serve the warrant at his South Tampa home, but no one opened the front door.

According to FOX 13 reporter Aaron Mesmer, police left the home without Brown, who is believed to still be inside the residence. A legal expert explained it's not uncommon for police to leave after trying to issue a warrant if they don't want to escalate things, can't physically see him in the home, or are negotiating a surrender behind the scenes.

"That allegation really, from what we see now, is not supported by video evidence, recording evidence, evidence of injury on the alleged victim," said Anthony Rickman, a Tampa attorney and legal analyst. "We're assuming that law enforcement thinks that he's in the house. But if he's not seen in a window, you know, seen in the doorway, they don't have evidence suggesting or establishing that he's in the house. They can just go breaking down the doors." 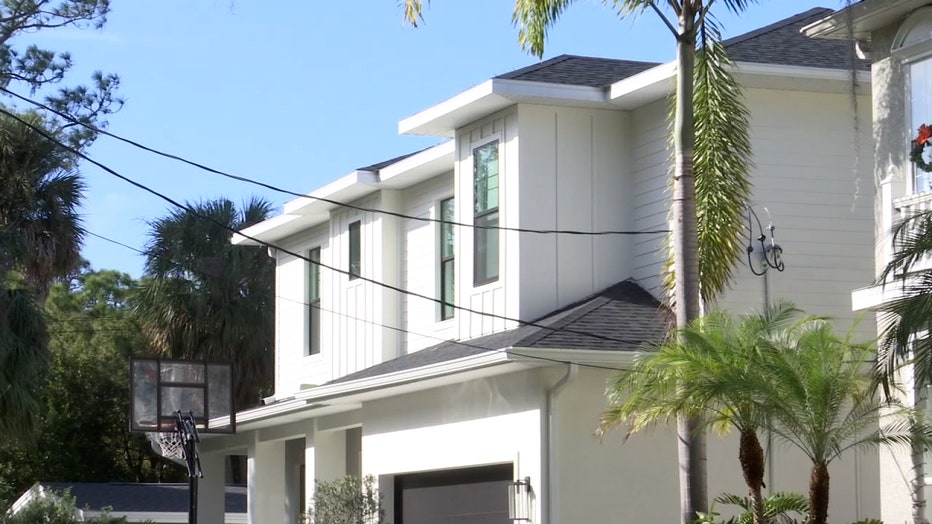 Exterior view of the Tampa house where an alleged domestic violence incident occurred between Antonio Brown and his former fiancée.

The arrest warrant was issued following an incident that occurred at the home with his ex-fiancée on Monday, Nov. 28. An argument between Brown and the woman turned physical after he threw a shoe at her, detectives said. The home is where she resides with the couple's four children and one of Brown's unrelated teenage sons.

PREVIOUS: Arians says Antonio Brown 'no longer a Buc' after dramatic exit during game against Jets

"The suspect exited the residence and threw a shoe at the victim striking her in the ponytail," the police report stated. "The victim had no injuries but believed the shoe was meant for her head. The suspect would not open the door or come outside to speak with officers. The suspect also during this incident attempted to issue an informal eviction to the victim."

The narrative written by an officer went on to say that the victim's belongings were thrown out into the street, but by the time law enforcement arrived, she had gathered them all and put them in the driveway. The victim also noted that Brown has two guns inside the house.

During the ordeal, police said Brown locked himself in the house while officers tried to speak to him. Investigators said Brown threatened to shoot her if she tried to enter the house.

"The suspect placed an informal eviction notice on the door … with 11/28/2022 at the date showing the victim has 7 days to gather her belongings and leave," the police report said in part. "The suspect continued throughout the incident to state that the victim had no right to be at that residence or to even gain entry to it because she did not live there. The victim's ID has the listed address as her residence as of 10/18/2022." 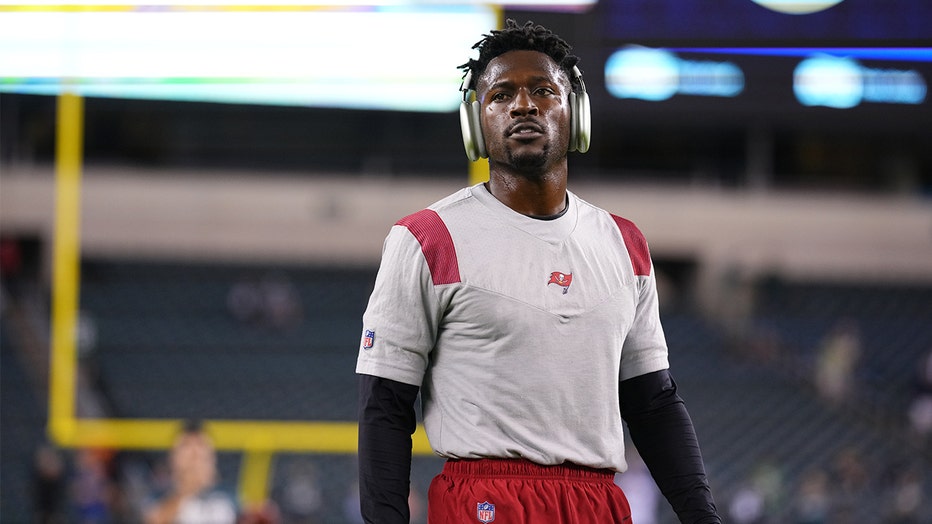 PHILADELPHIA, PENNSYLVANIA - OCTOBER 14: Antonio Brown #81 of the Tampa Bay Buccaneers warms up prior a NFL game against the Philadelphia Eagles at Lincoln Financial Field on October 14, 2021 in Philadelphia, Pennsylvania. (Photo by Cooper Neill/Gett

The officers said after "many failed attempts" to convince Brown to allow her to gather her belongings, they advised the victim to spend the night elsewhere. According to police, the children were told they could go back inside the house, but they were afraid to.

The next day, Tampa police filed a risk protection order against Brown, which can be issued if a person poses a significant risk to themselves or others and has access to a gun. A judge denied the request.

Domestic violence advocates have said it’s important for police to pursue a case like this because oftentimes domestic violence is minimized and victims need to know they are supported.

It's not Brown's first run-in with the law. Back in 2019, he faced sexual assault accusations from a former trainer, but that case eventually reached a settlement. Then, in 2020, he assaulted a moving truck driver and received a year of probation.

Also in the same year, he was accused of destroying a surveillance camera and throwing his bicycle at a security guard shack in his gated community. 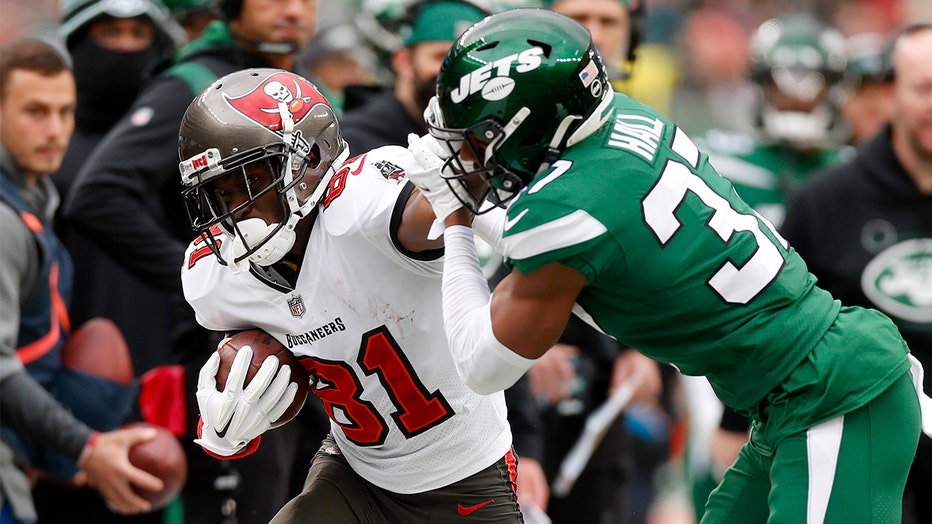 Antonio Brown #81 of the Tampa Bay Buccaneers in action against Bryce Hall #37 of the New York Jets at MetLife Stadium on January 02, 2022 in East Rutherford, New Jersey. This was Brown's final game with the Bucs. (Photo by Jim McIsaac/Getty Images)

Earlier this year, Brown, a free agent, was kicked off the Buccaneers team after leaving the field shirtless as Tampa Bay faced the New York Jets. The Bucs won 28-24. After the game, then-coach Bruce Arians said Brown was no longer with the team.

Brown’s mid-game meltdown came late in the third quarter with Tampa Bay trailing 24-10. He appeared animated while talking to teammate Mike Evans when he stripped off his pads, jersey, gloves and T-shirt — tossing the gloves and T-shirt into the stands — and then walked bare-chested down the sideline and into the end zone. He then waved to fans as jogged through the end zone and into the tunnel at MetLife Stadium.

In just the previous month, Brown was suspended for three games for violating the league’s COVID-19 protocols. He also has a history of personal conduct issues and bizarre behavior.

In the days after, he released texts from then-head coach Bruce Arains and Tom Brady’s longtime trainer Alex Guerrero suggesting he was dealing with an injury leading up to the game that prompted his decision to walk off the field mid-game.

Brown has also been outspoken about Brady amid his split from ex-wife Gisele Bündchen, trolling him with photos of him and Bündchen hugging on the field following the Buccaneers’ Super Bowl LV victory.

Brown also played for the Pittsburgh Steelers, the Oakland Raiders and the New England Patriots.