The Rough Riders museum keeps the history of the first volunteer Calvary regiment in the U.S. alive.

TAMPA, Fla. - Tampa’s Rough Riders are a staple throughout the Bay Area, keeping the legacy of Teddy Roosevelt and the members of the 1st US Volunteer Cavalry Regiment alive. Now a museum exhibit is dedicated to educating the next generation about this historical era.

The Rough Riders were formed right after the declaration of war on April 25, 1898. Teddy Roosevelt and his Rough Riders were in Tampa in June 1898.  It took three days for all of the trains to come in from San Antonio. They off-loaded in Seffner, got their horses and rode into Tampa and rode right down what was called Lafayette Street and is now known as Kennedy Blvd.

About a year ago, the Rough Riders turned a meeting hall into their museum. It features large murals that were hand-painted by French artist Geff Strik who now lives in St. Petersburg.

A tent is set up with a mannequin of Teddy Roosevelt inside. There are also artifacts including rifles, pistols, canteens, satchels and other items the organization has been collecting over the years.

"What we want people to understand about Teddy Roosevelt is that he was not just the 26th president. He was a man. He was a sickly youth. He had challenges when his wife passed away during childbirth. He lost the child as well. He had a lot of challenges. He eventually became the assistant secretary of the Navy," shared Tampa Rough Riders president, Lt Col. William "Billy" Hogan. 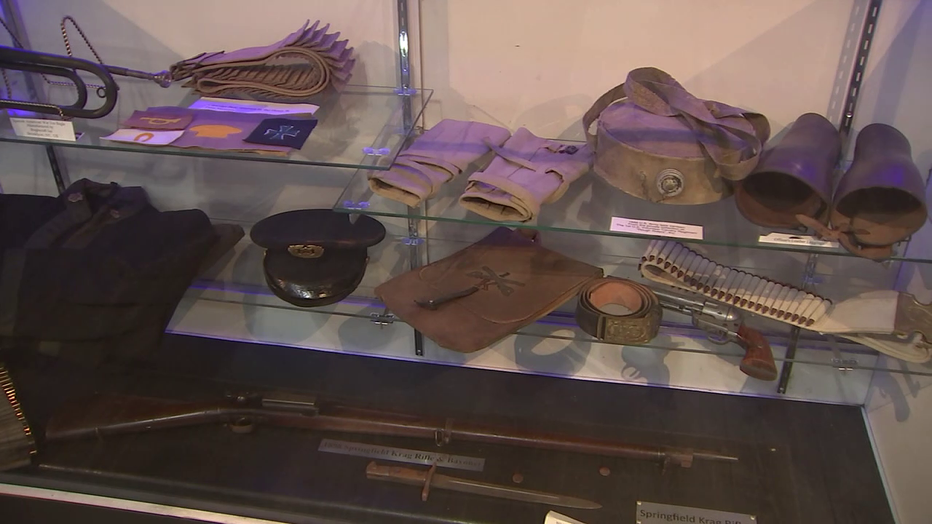 The purpose of the museum is to highlight the role Roosevelt and his troops played in American history. Many from the first U.S. Volunteer Cavalry are unsung heroes.

"Americans typically think of Cuba, San Juan Hill, they think of the Rough Riders story. They don’t think about the indigenous Cuban people who were there fighting. This was their third war of independence from Spain and we came and helped them win that," Hogan explained. "Unless you’re African American you don’t understand necessarily the importance of the Buffalo Soldiers not just in Cuba but in American military history from 1866 to I think 1947. We want that story to be told."