FDA warns against use of hydroxychloroquine, chloroquine outside of hospitals

The Food and Drug Administration issued a warning about the antimalarial drugs after it became aware of reported heart risks. Both have been embraced by Trump and others as a potential COVID-19 treatment.

NASHVILLE, T.N. - Two Tennessee brothers accused of price gouging and hording a stockpile of nearly 18,000 bottles of hand sanitizer amid supply shortages during the COVID-19 pandemic avoided criminal punishment after reaching a settlement with the state attorney general’s office Tuesday.

Matt and Noah Colvin were able to avoid fines after agreeing to donate their supplies to a Tennessee non-profit and refrain from future hoarding and price gouging activities.

“Disrupting necessary supplies during an unprecedented pandemic is a serious offense,” said Tennessee Attorney General Herbert H. Slatery III. “It became clear during our investigation that the Colvins realized this, and their prompt cooperation and donation led to an outcome that actually benefited some consumers.”

RELATED: Can’t find hand sanitizer? The World Health Organization has a recipe to make your own

The story of the two was first reported by the New York Times when they had allegedly cleared out hand sanitizer from stores around Chattanooga with the intent to sell the items on Amazon.

They allegedly sold the sanitizer for up to $70 a bottle, but declined to disclose their exact profits.

Matt Colvin defended the actions in a later interview with the Times, saying he didn’t realize how bad the shortages would be. 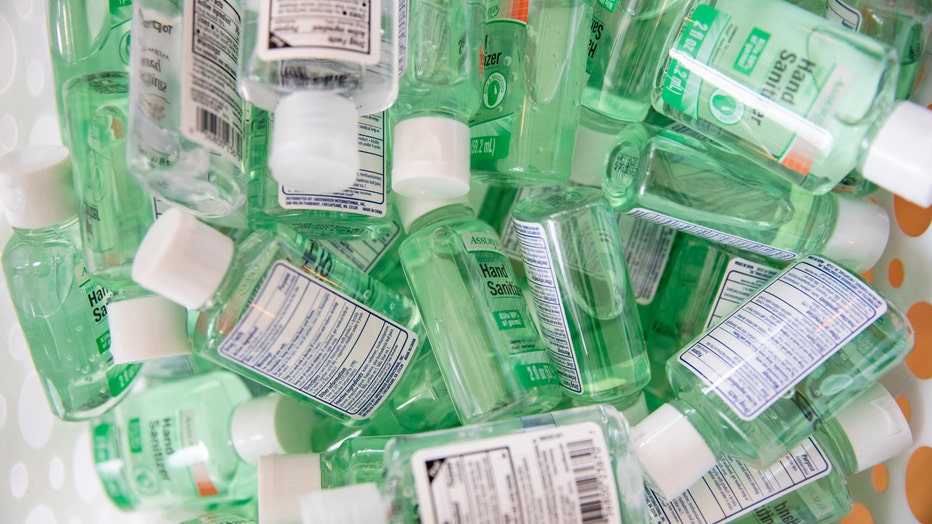 FILE - A basket of smaller bottles of hand sanitizer in the coronavirus pop-up store by Adilisha Patrom, owner of the Suites DC, a co-working and event space across the street from Gallaudet University, who started her pop-up store that sells face ma (Photo by Samuel Corum/Getty Images))

“When we did this trip, I had no idea that these stores wouldn’t be able to get replenished,” he said. “It was never my intention to keep necessary medical supplies out of the hands of people who needed them.”

After online retailers like Amazon shut down sellers like the Colvin brothers for price gouging, they were left with their surplus sitting in their garage with no place to sell it.

In March, President Donald Trump signed an executive order making it illegal to excessively stockpile personal protective equipment that remains in high demand following waves of panic buying amid the news of mass shutdowns to stop the spread of the coronavirus.

RELATED: How to make your own face mask at home — even if you don’t know how to sew

The maker of Lysol and another disinfectant says its products should not be used as an internal treatment for the coronavirus.

He said investigators will go after people who are “hoarding these goods on an industrial scale for the purpose of manipulating the market.”

The executive order allows the president to designate some items as “scarce.”

Barr said, "If you are sitting on a warehouse with surgical masks, you will be hearing a knock on your door.”

Amardeep “Bobby” Singh, 45, was charged with violating the Defense Production Act of 1950 in what authorities described as the first such prosecution during the novel coronavirus pandemic.

Singh is expected to surrender to authorities next week in the case around what is known as personal protective equipment, which has become a hot commodity during the outbreak.