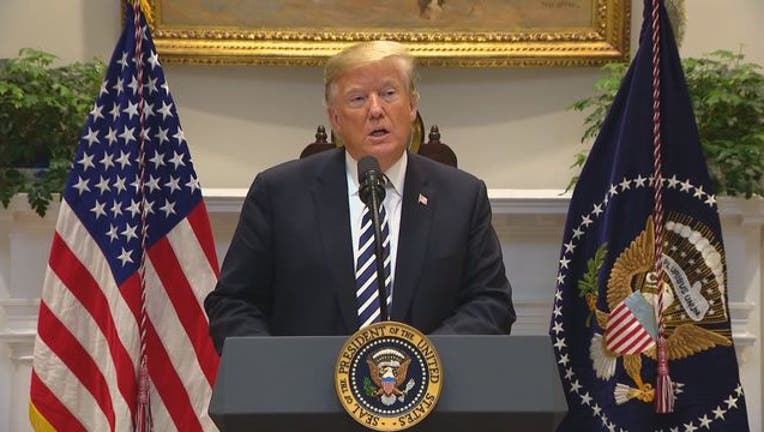 COLUMBIA, Mo. (AP) — President Donald Trump implored voters on Thursday to reject Democratic Sen. Claire McCaskill and to instead install a Republican in her seat who would fully back his agenda.

Trump appeared at a rollicking campaign rally in Columbia, home of the state's largest university, in an airline hangar draped in American flags. It was his second rally in an 11-stop, eight-state tour designed to boost Republican turnout ahead of Tuesday's crucial midterm elections.

The president, accompanied by McCaskill's Republican challenger, Josh Hawley, declared that Hawley "will be a star."

With four days to go until midterm elections that determine control of Congress, Republicans are optimistic they could make gains in the Senate, but they might struggle to maintain a majority in the House.

McCaskill is among a number of vulnerable Democrats running in red states. She is a top target for Republicans seeking to expand the party's slim 51-49 edge in the U.S. Senate.

McCaskill is pitching herself as a moderate as she seeks to hold onto her seat. She has sought to distance herself from "crazy Democrats" and said in an appearance on Fox News that she supports Trump's efforts to secure the southern border. Hawley has dismissed her efforts and argues that she is not the right fit for an increasingly conservative state.

Trump said that McCaskill has been "saying nice things" but that she "wants to get elected and then she'll always vote against us."

A check of her record, however, shows that McCaskill votes with the president about half the time, though she has opposed him on some key issues, including his tax cuts and the recent confirmation of Supreme Court Justice Brett Kavanaugh.

The president, who this week threatened to end a constitutional right that automatically grants citizenship to any baby born in the United States, railed against the 14th Amendment during the Thursday rally, calling it a "crazy, lunatic policy" supported by Democrats.

"The Democrats want to continue giving automatic birthright citizenship to every child born to an illegal immigrant, even if they've been on our soil for a mere matter of seconds," Trump said. "Hundreds of thousands of children born to illegal immigrants are made automatic citizens of the United States every year because of this crazy, lunatic policy that we can end."

Trump expressed optimism for the midterm elections, though he noted that Republican momentum had been blunted in recent days by "two maniacs" — a reference to a mail bomb scare and a mass shooting at a Pittsburgh synagogue. He added, "We don't care about momentum when it comes to a disgrace like just happened to our country."

However, he said, "It did nevertheless stop a certain momentum. And now the momentum is picking up."

The president will return to Missouri before Election Day, rallying voters Monday in Cape Girardeau.