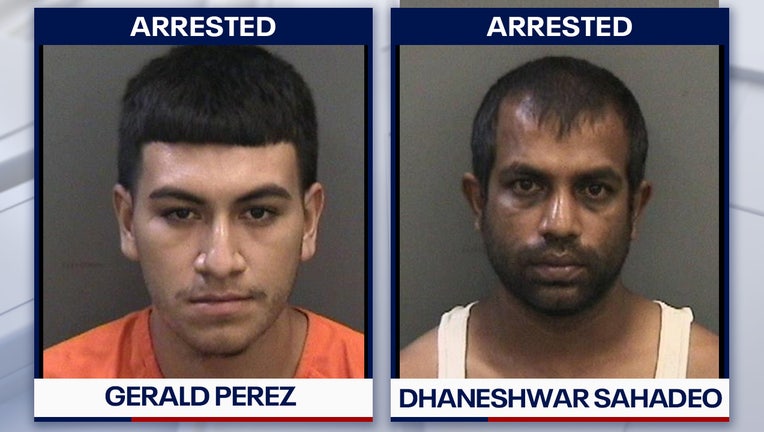 On Friday, around 10:08 p.m., a Tampa police helicopter was flying over the Interstate 4-Interstate 275 interchange when they were targeted by a green laser, officials said. They changed their flight path, but noted the laser was coming from the downtown area.

Officers said they aimed the chopper camera to the location and were targeted, again, by the green laser light. The pilots notified the Tampa Air Traffic Control tower, dispatch and officers on the ground.

Eventually, they said they located the suspect, who would target the helicopter "several times, for several seconds each time." The suspect was identified as 21-year-old Gabriel Perez, and was spotted sitting in Curtis Hixon Park next to another individual.

Pilots said they could "clearly" see that Perez "was the only one who targeted them with the laser."

"Perez continued to point the laser at the helicopter as ground units worked to locate him," according to Tampa police. "Perez was located and taken into custody."

On Saturday, around 10 p.m., police said the Tampa Air Traffic Control tower advised aircraft in the area that someone was pointing a laser, adding that a Cessna that flew over the airport was targeted by a green laser.

Tampa police said air traffic control directed law enforcement pilots to the area, and they were targeted by a green laser from a neighborhood. Officers said they began recording and were able to pinpoint which home the laser originated from.

"Officers saw a subject in front of the house, sometimes standing, and sometimes sitting on a chair, just outside the garage," according to police.

That subject was identified as 33-year-old Dhaneshwar Sahadeo. Tampa police said he pointed the laser at the helicopter several times. Officers directed Hillsborough County deputies to the home on Burke Street where Sahadeo was taken into custody.

Pointing a laser at an aircraft is considered to be a federal crime. According to the FAA, there were a total of 6,852 laser incidents in the U.S. in 2020. The year before that, a total of 6,136.