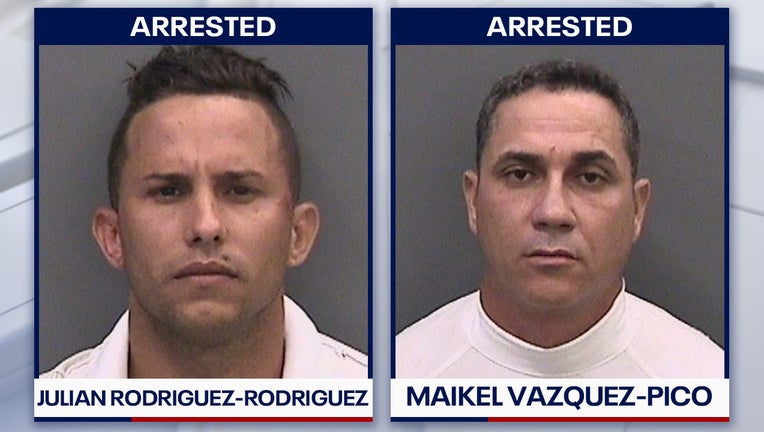 TAMPA, Fla. - Two Hillsborough County men who were arrested during a protest in support of anti-government demonstrations in Cuba are being held on charges related to Florida's new anti-riot law.

Julian Rodriguez-Rodriguez, 30, from Tampa, and Maikel Vazquez-Pico, 39, from Riverview, were among those arrested Tuesday night as a group of protesters attempted to take over an exit ramp at Interstate 275 and Dale Mabry Highway in Tampa.

Both were arrested on charges that include battery on a law enforcement officer, resisting law enforcement and taking part in an unlawful assembly that blocked streets or sidewalks, records show.

Gov. Ron DeSantis signed into Florida law a measure earlier this year that boosts penalties against demonstrators who turn violent and creates new criminal penalties for those who organize demonstrations that get out of hand. Provisions of the law also make it a felony to block some roadways and give immunity to people who drive through protesters blocking a road.

A rally in support of Cuban protesters spilled into the busy traffic lanes of Dale Mabry Highway and I-275 Tuesday afternoon. Activists blocked traffic as they waved flags and demanded U.S. action.

The bill was introduced after last summer’s protests for racial justice during which some Black Lives Matter protesters were met by police with tear gas and arrests when they took to the streets for days at a time.

The men were being held without bond in the Hillsborough County Jail early Thursday.

A third man, 34-year-old Evelio Ramirez-Carrasco of Tampa, also was arrested on charges of unlawful assembly and resisting a law enforcement officer without violence — both misdemeanors — in connection with the protests. Ramirez-Carrasco was given a notice to appear in court, records show.

Protesters blocked the Palmetto Expressway near Hialeah for about 30 minutes Wednesday night, news outlets reported. On Tuesday, they blocked the same highway for hours during the rainy rush hour.

During a roundtable about Cuba in Miami on Tuesday, Gov. Ron DeSantis said the demonstrations in South Florida, and other parts of the state, were "fundamentally different than what we saw last summer."

The governor’s spokesperson, Christina Pushaw, said he had signed the "anti-riot" law to empower law enforcement to protect and serve the people of Florida. In an email to The Associated Press, she pushed back against assertions that political ideology could create inequities in the application of the law and the Republican governor would have a hand in deciding which protesters or causes would be subject to the new law.

"It is not the Governor’s job to arrest or decline to arrest any citizen for any reason; that is the responsibility of law enforcement in each jurisdiction," she said. "The Governor does not tell law enforcement how to do their day to day jobs. However, it should go without saying that anyone who breaks the law is subject to arrest."

Pushaw pointed out that blocking roadways without a permit was illegal long before the new law, and law enforcement agencies across the state have discretion to enforce the law in a way to ensure public safety.

In Tampa on Tuesday evening, police used a public address system to order the crowds to disperse. About 45 minutes later, Vazquez-Pico and Rodriguez-Rodriguez tried to walk onto the interstate from the entrance ramp, according to the arrest report.

Rodriguez-Rodriguez put an officer into a bear hug as the officer was trying to arrest another protester, according to an arrest report. He then punched an officer in the face, breaking his glasses as the officer tried to arrest him, the report said. He continued to resist arrest until he was placed in handcuffs.

It was not immediately known whether the two men have lawyers who can speak on their behalf.