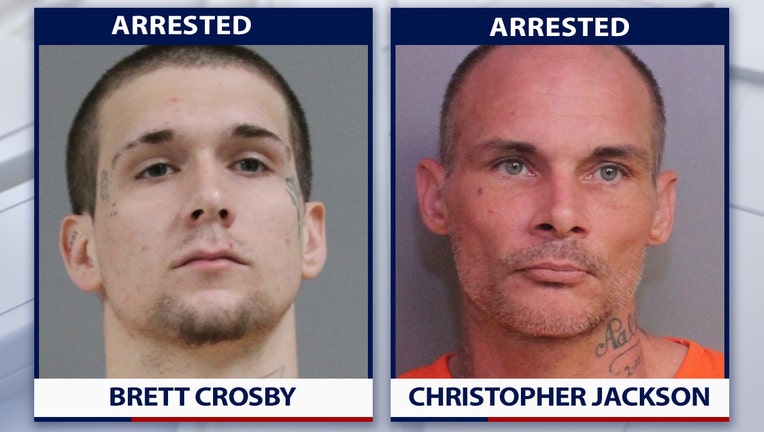 BARTOW, Fla. - The Polk County Sheriff's Office has charged two inmates, Brett Crosby, 20, and Christopher Jackson, 41, with first-degree murder for their assault of another inmate at the South County jail in Frostproof.

According to detectives, shortly after 12:30 p.m., two detention deputies saw three inmates fighting on a second-story walkway and ran to break-up the fight while ordering the three to stop fighting.

All three suspects were seen actively participating in the fight, but at the moment detention deputies got closer, Crosby was seen stomping on the head of Shawn Holliday, 30, who was lying on the floor, detectives said.

Jail medical staff immediately arrived and tended to Holliday, who was airlifted to the Lakeland Regional Health where it was determined he suffered a severe brain injury, according to PCSO.

Inmates told detectives that the fight was about Holliday owing food to Crosby. They said that Holliday would ask other inmates for food and was supposed to repay them with food later.

Detectives were told that Crosby confronted Holliday about the debt on Tuesday, and Holliday refused to repay his debt of food, so Crosby told Holliday he wanted to fight. Holliday was reported to have immediately sucker-punched Crosby.

A fight between the three started on the second-floor walkway of the jail dorms and as a result of the fight, Holliday became unconscious on the floor. As he was unable to defend himself, Crosby began stomping on his head which led to injuries that were ultimately fatal, detectives said.

Crosby has been in the Polk County Jail since September 29, 2018, after being arrested and charged for attempted 2nd-degree murder (among other charges) for firing a rifle at other vehicles. His prior criminal history consists of 19 felony charges and 10 misdemeanors.

Jackson has been in jail since he was arrested on April 23, 2018, for robbery and burglary with battery. His criminal history is made up of 53 felony charges and 19 misdemeanors. He has been in state prison eight times.

Holliday was arrested on March 30, 2020, for burglary and tampering with a witness. His prior criminal history has 37 felony and 16 misdemeanors. He has been to state prison three times.