Officials say the escape vehicle used by inmate Casey White, and corrections officer Vicky White, has been found two hours north of Florence, Alabama. A $25,000 reward has been offered for information leading to the arrest of the couple.

Capital murder suspect Casey Cole White, who escaped from an Alabama jail last week with the help of a correctional officer he developed a "special relationship" with, has multiple tattoos associated with the white supremacist prison gang Southern Brotherhood, the U.S. Marshals said.

It's been nearly one week since Vicky White, formerly the assistant director of corrections at Lauderdale County Detention Center, led Casey White out of the facility and never returned. The two are not related.

A confederate flag and the words, "Southern Pride," are emblazoned on Casey White's back, according to images released Thursday evening. He also has a sleeve on his right arm and a shield on his chest that include the Nazi SS logo.

The U.S. Marshals said that 6'9" Casey White should be considered "armed and extremely dangerous," and may have an AR-15 rifle, handguns and a shotgun.

Casey White and Vicky White met in 2020 while he was an inmate at the Lauderdale County Detention Center, awaiting trial on murder-for-hire charges.

Lauderdale County Sheriff Rick Singleton said that Casey White previously tried to break out of the facility in 2020, but officers caught him with a shank and he was transferred to William E. Donaldson Correctional Facility in Bessemer, Alabama.

Casey White and Vicky White "were in contact via phone" from 2020 to 2022 while Casey was in custody at the Donaldson facility, Singleton said Thursday.

He was transferred back to the county jail in February, about two months before he escaped with the help of Vicky White, according to Singleton. 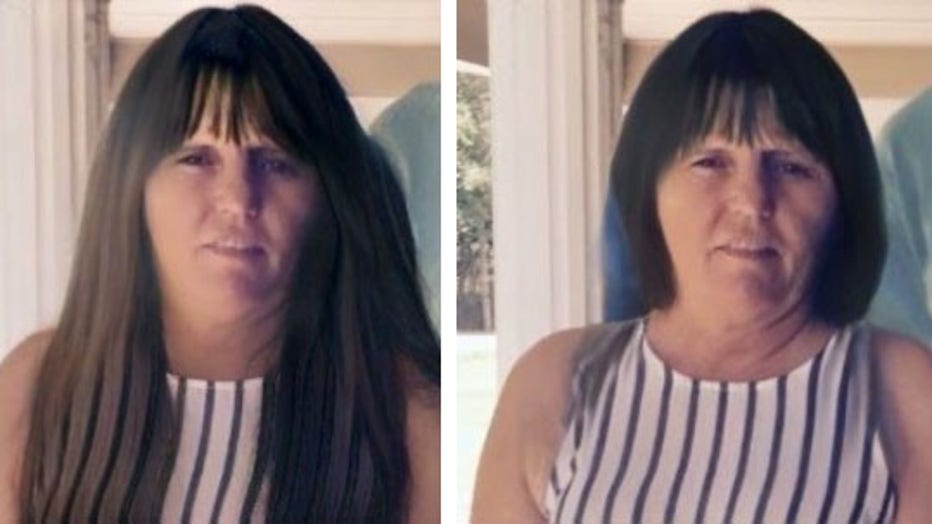 The U.S. Marshals Service released rendering of what Vicky White may look like if she dyed her hair darker. (U.S. Marshals)

After the pair left the county jail last Friday, they ditched Vicky White's police vehicle and got into a 2007 orange or copper colored Ford Edge with damage to the rear left bumper that she had recently purchased.

Vicky White is 5'5" and weighs about 145 pounds. The U.S. Marshals said she may have died her blonde hair a darker shade and has a waddling gait.

Anyone with information about Casey White and Vicky White's locations can contact the U.S. Marshals at 1-800-336-0102.

Here is the latest information on the search for an escaped Alabama murder suspect and a corrections officer, as of May 5, 2022. Austin Westfall reports from Florence, Alabama.