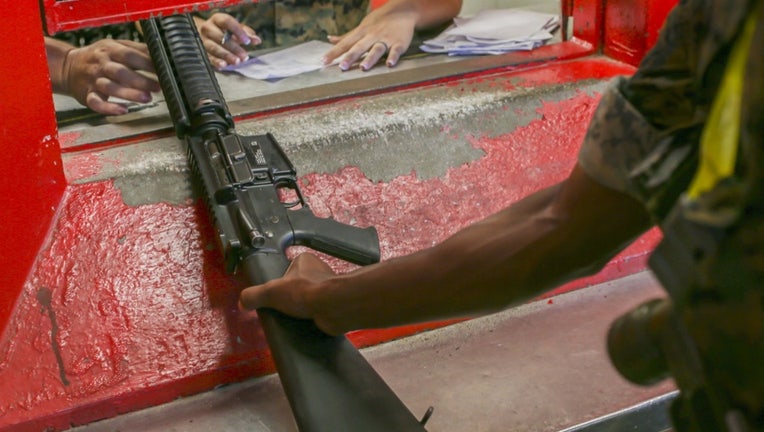 A recruit receives their rifle on Marine Corps Recruit Depot Parris Island S.C. June 21, 2019. The armory is in charge of over 10,000 rifles on Parris Island.(U.S. Marine Corps photo by Lance Cpl. Ryan Hageali)

In the first public accounting of its kind in decades, an Associated Press investigation has found that at least 1,900 U.S. military firearms were lost or stolen during the 2010s, with some resurfacing in violent crimes. And that's certainly an undercount.

Government records covering the Army, Marine Corps, Navy and Air Force show pistols, machine guns, shotguns and automatic assault rifles have vanished from armories, supply warehouses, Navy warships and elsewhere. These weapons of war disappeared because of security failures that, until now, have not been publicly reported, including sleeping troops and a surveillance system that didn’t record.

In one case, authorities linked an Army pistol stolen from Fort Bragg, North Carolina, to four shootings in New York before it was recovered. Another stolen Army pistol was used in a Boston street robbery.

Weapon theft or loss spanned the military’s global footprint. In Afghanistan, someone cut the padlock on an Army container and stole 65 Beretta M9s -- the same type of gun recovered in New York. The war zone theft went undetected for weeks, when empty pistol boxes were discovered in the compound. The weapons were not recovered.

While AP’s focus was firearms, military explosives also have been lost or stolen, including armor-piercing grenades that ended up in an Atlanta backyard. In that incident and many others, military investigators closed the case without finding the person responsible.

The Pentagon used to share annual updates about stolen weapons with Congress, but that requirement ended years ago and public accountability has slipped. The Army and the Air Force couldn’t readily tell AP how many weapons were lost or stolen from 2010 through 2019.

On Tuesday, in the wake of the AP investigation, Army Secretary Christine Wormuth told a hearing of the Senate Armed Services Committee she would be open to new oversight over weapons accountability.

For this reporting, the AP built its own database by reviewing records including hundreds of military criminal case files and data from registries of small arms, as well as internal military analysis. In its accounting, whenever possible AP eliminated cases in which firearms were lost in combat, during accidents such as aircraft crashes and similar incidents where a weapon’s fate was known.

From the start of this reporting 10 years ago, armed services have been reluctant to share information. For years, the Army suppressed the release of information. Unlike the other branches, the Air Force has released no data at all.

Military weapons are especially vulnerable to corrupt insiders responsible for securing them. They know how to exploit weak points within armories or the military’s enormous supply chains. Often from the lower ranks, they may see a chance to make a buck from a military that can afford it.

Theft or loss happens more often than the Army has publicly acknowledged. During an initial interview, Miller significantly understated the extent to which weapons disappear, citing records that report only a few hundred missing rifles and handguns. An internal Army analysis that AP obtained tallied 1,303 firearms.

In a second interview, Miller said he hadn’t been aware of the memos, which had been distributed throughout the Army, until AP pointed them out. Army officials later said the total is imperfect because it includes some recovered guns and may include some duplicates.

Like Miller, top officials within the Marines and Secretary of Defense’s office said weapon accountability is a high priority — and when the military knows a weapon is missing, it does trigger a concerted response to recover it. The officials also said missing weapons are not a widespread problem.

Weapons accountability is part of military routine. Armorers are supposed to check weapons when they open each day. Sight counts, a visual total of weapons on hand, are drilled into troops whether they are in the field, on patrol, or in the arms room. But as long as there have been armories, people have been stealing from them.

In the absence of a regular reporting requirement, the Pentagon is responsible for informing Congress of any "significant" incidents of missing weapons. That hasn’t happened since at least 2017.

Stolen military guns have been sold to street gang members, recovered on felons and used in violent crimes.

The AP identified eight instances in which five different stolen military firearms were used in a civilian shooting or other violent crime, and others in which felons were caught possessing weapons. Federal restrictions on sharing firearms information publicly mean the case total is certainly an undercount.

The military requires itself to inform civilian law enforcement when a gun is unaccounted for, and the services help in subsequent investigations. The Pentagon does not track crime guns, and spokesman Kirby said his office was unaware of any stolen firearms used in civilian crimes.

The closest AP could find to an independent tally was done by the FBI’s Criminal Justice Information Services. It said 22 guns issued by the U.S. military were used in a felony during the 2010s. That total could include surplus weapons the military sells to the public or loans to civilian law enforcement.

Those FBI records also appear to be an undercount. They say that no military-issue gun was used in a felony in 2018, but the AP found that at least one was.

Back in June 2018, police in Albany, New York, were searching for a young man they’d placed at an April shooting that involved the Beretta M9 stolen from the Army. By the time authorities found him two months later, bullet casing analysis would link the gun to two other shootings, plus a fourth in 2017.

The Army still doesn’t know who stole the gun, or when.