Bystanders saw a manatee in a Siesta Key canal that appeared to be in distress, only to soon realize she was actually giving birth.

SIESTA KEY, Fla. - Bystanders saw a manatee in a Siesta Key canal that appeared to be in distress -- only to soon realize she was actually giving birth.

Cindy Burnett, a volunteer at Mote Marine Laboratory and Aquarium, was at home in Siesta Harbor on Monday when she noticed a manatee acting strangely in the water.

A crowd watched the manatee rolling over several times, and saw what they thought was a plastic bag stuck to her.

Burnett called Mote's hotline to report the behavior, and while on the phone with a biologist, the group realized the manatee was in a different kind of distress -- she was in labor.

After seeing a brief rush of what appeared to be blood, the bystanders watched as the manatee gave birth to a small calf.

Mote staff biologist Amber Lea Kincaid said she was glad that someone had recorded video and shared it with them, adding that anyone who sees marine life in distress in Sarasota or Manatee counties should call their hotline and never attempt to assist the animal.

"Taking videos is also very helpful for us, so when we arrive on scene, we can be prepared for what's going on," Kincaid said. "And in this case, we knew that we didn't need to respond at all!"

Mote's Manatee Research Program identified the manatee mom by the unique scares on her back and tail, and said she was first spotted in Ft. Myers back in 2005. Researchers have documented 10 other sightings of her from 2005 to 2019. 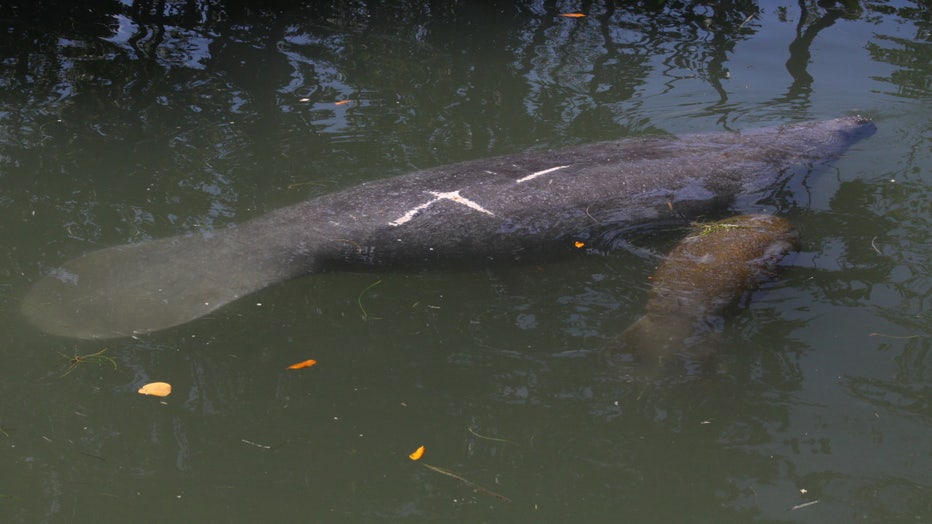 "We've also documented at least three other calves with her throughout the years, making April 12th's birth at least her fourth," biologist Jennifer Johnson said. "Our sightings usually had her around the Ft. Myers power plant in the winter and then several locations around Sarasota Bay in the summer."

The new mom and calf aren't the only pairs spotted in the Sarasota County area. Biologists said they've seen quite a few mom and calf pairs this week, noting many manatees are on the move as waters continue to warm.

Because more manatees will be out, Mote scientists say it's an important reminder for those on the water to be on the lookout to keep the sea cows safe. Watercraft collisions are the leading human-related causes of death for manatees.