TAMPA, Fla. - Tampa Police Chief Mary O’Connor was recently captured on body camera video trying to get out of a ticket when a Pinellas County deputy pulled her and her husband over for driving a golf cart without proper tags.

According to the Tampa Police Department, O’Connor and her husband were riding in a golf cart without a license plate outside a residential area in Oldsmar on November 12.

The incident was captured on a body camera worn by the deputy who pulled them over.

A Pinellas County deputy pulled over Tampa Police Chief Mary O'Connor and her husband back on November 12. They were riding in a golf cart without a license plate outside a residential area in Oldsmar, the police department said. Body camera video from the incident was released by TPD.

In the video, the deputy can be heard explaining to the couple that they were pulled over for driving an unlicensed vehicle without the tag on it on the roadway. 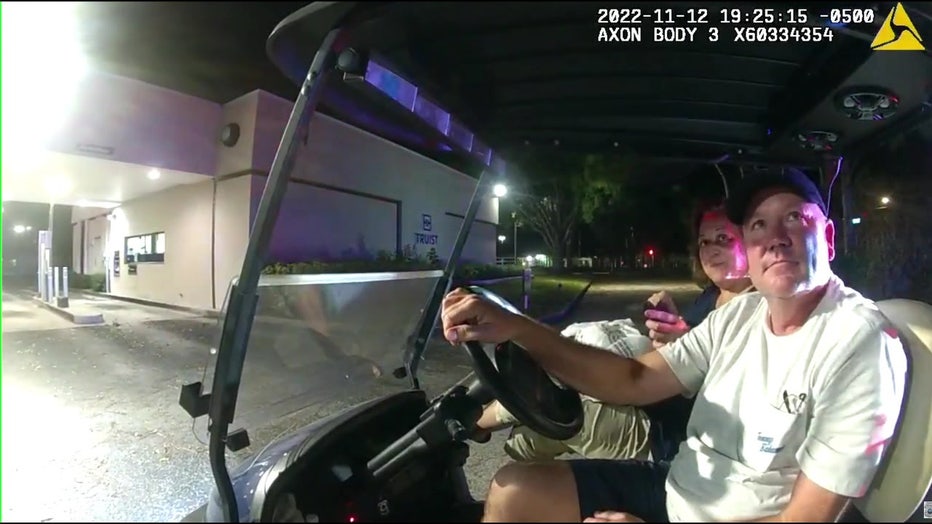 Tampa Police Chief Mary O'Connor and her husband were recently pulled over by a Pinellas County deputy for driving a golf cart without a license plate.

Moments after the deputy made contact with the couple, O’Connor asked him if his body camera was on.

When the deputy said yes, O’Connor told him that she was the police chief in Tampa and said, "I’m hoping that you’ll just let us go tonight."

That’s when she pulled out her badge and handed it to him. 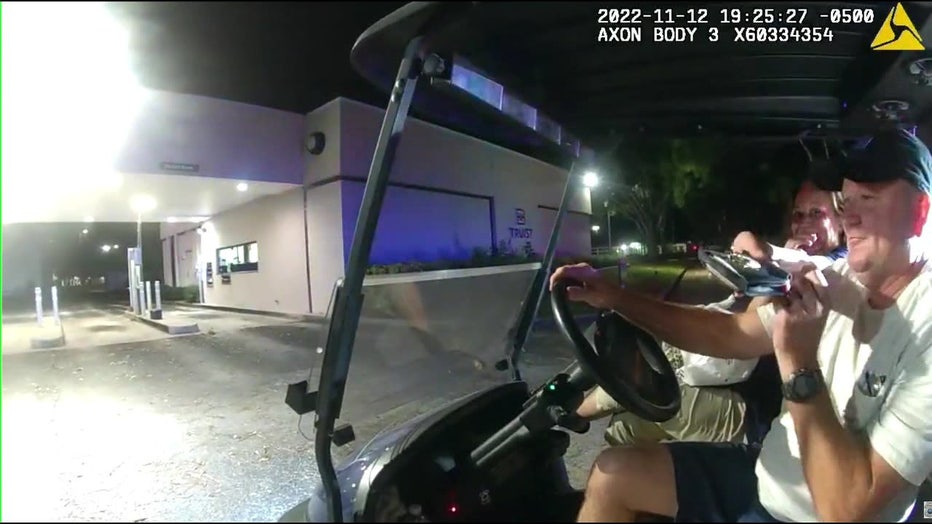 Tampa Police Chief Mary O'Connor is seen on body camera video flashing her badge to a Pinellas County deputy who pulled her and her husband over recently.

The deputy said she looked familiar and handed back her badge.

The deputy explained to O’Connor and her husband that they’ve had a lot of problems with golf carts in the area and told them it was nice to meet them.

The majority of the Tampa City Council approved the mayor's nominee for the next police chief. Two out of six city council members voted "no." Recently-appointed Tampa Police Chief Mary O’Connor appeared before City Council today for what was expected to be a heated confirmation hearing.

That’s when O’Connor pulled out a business card and handed it to the deputy. She told him, "If you ever need anything, call me." When he said "okay," she responded with "serious."

"It was poor judgment on our part to be driving a golf cart on a public roadway without the appropriate tags. This was the first time we had exited the golf-cart friendly community in which we own property with this vehicle, prompting the need for a license plate," O’Connor said. "In hindsight, I realize how my handling of this matter could be viewed as inappropriate, but that was certainly not my intent. I knew my conversation was on video, and my motive was not to put the deputy in an uncomfortable position. I have personally called the Pinellas County Sheriff offering to pay for any potential citation."

She added, "I have expressed great remorse to the mayor, and I apologize to the residents of Tampa who have a reasonable expectation of better judgment from their chief of police. As someone who has dealt with, taken ownership of and grown from my past mistakes, I know that no one is above the law, including me."

Former TPD Chief Brian Dugan told FOX 13, "As chief of police you're held to a higher standard. To say I'm disappointed is an understatement."

Mayor Jane Castor said, "We hold everyone accountable, no matter their position, and this behavior was unacceptable. Chief O'Connor will go through the due process and face appropriate discipline."

According to TPD, Chief O'Connor has voluntarily reached out to the Tampa Police Professional Standards Bureau asking to receive the same discipline that any officer would receive for similar conduct.

An internal review of the incident is underway.