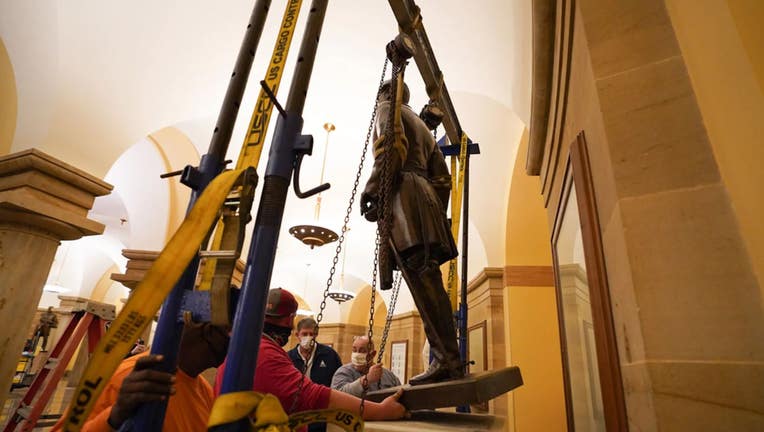 Gov. Ralph Northam announced that Virginia’s statue of Confederate general Robert E. Lee was removed from the United States Capitol overnight Monday. A representative from the governor’s office was present for the removal along with Sen. Tim Kaine an

Each state is permitted to have two statues in the collection, and since 1909 Virginia had one of Lee and one of President George Washington. A state commission last week decided that a statue of civil rights leader Barbara Rose Johns will take its place.

"The Confederacy is a symbol of Virginia’s racist and divisive history, and it is past time we tell our story with images of perseverance, diversity and inclusion," Northam said in a statement. "I look forward to seeing a trailblazing young woman of color represent Virginia in the U.S. Capitol, where visitors will learn about Barbara Johns’ contributions to America and be empowered to create positive change in their communities just like she did."

Johns, as a 16-year-old high school student in 1951, led a walkout at Robert Russa Moton High School in protest of conditions at the all-Black school that were inferior to the local White school. This led to a court battle that became one of the five cases decided by the Supreme Court in Brown v. Board of Education, which ended school segregation.

The House passed a measure over the summer to remove all 12 Confederate statues in the Capitol, but so far the Senate has not taken action.

Sen. Tim Kaine, D-Va., and Rep. Jennifer Wexton, D-Va., were present for the removal of the Lee statue, along with a representative from Northam's office. The Virginia Museum of History and Culture in Richmond will take ownership of the statue, as per a request from the state commission.