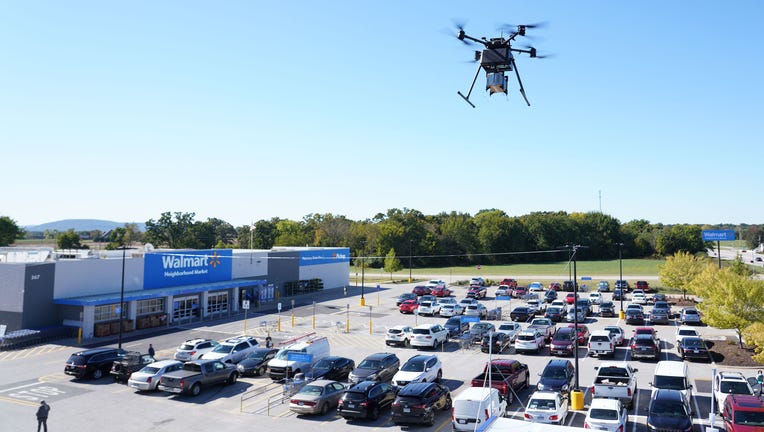 Walmart said it is expanding a drone delivery service to 34 locations across the U.S. by the end of 2022. (Photo credit: Walmart)

BENTONVILLE, Ark. - Walmart is expanding its drone delivery service to six U.S. states., allowing customers to receive thousands of items at their homes in 30 minutes.

The world’s largest retailer, which previously invested in the drone delivery company DroneUp, said Tuesday that it is widening its delivery service to 34 locations by the end of 2022, potentially reaching 4 million U.S. households.

The new markets include locations in Arizona, Arkansas, Florida, Texas, Utah and Virginia. Walmart, based in Bentonville, Arkansas, already has used its drone delivery service in its home state and elsewhere as part of a pilot program that was announced in 2020.

Walmart’s new drone delivery will operate between 8 a.m. and 8 p.m. with a fee of $3.99, the company said. The expansion of its operation is also significant in that customers aren’t limited to pre-selected items. Everything from Tylenol, to diapers, to hot dog buns can be delivered by air, with the delivery totaling up to 10 pounds.

"...Simply put, if it fits safely it flies," Walmart added in a statement.

Interestingly, the company noted how it initially thought customers would use drone deliveries for emergency items, but instead are using it "for its sheer convenience, for a quick fix for a weeknight meal."

Walmart said the top-selling item at one of its current hubs is Hamburger Helper.

DroneUp operates commercially throughout the U.S. It was the first operator to use the FAA 107.39 waiver, an operation that allows for delivery flights to be conducted over people and moving vehicles, Walmart said in a 2021 statement when it first announced the investment.

The participating Walmart stores will house a DroneUp delivery hub with a team of certified pilots, the company said. Once a customer places an order, the item is pulled from the store, packaged, and loaded into the drone. It is then delivered to the customer’s yard using a cable that lowers the package.

Walmart said its expansion means it could deliver more than 1 million packages by drone in a year.

Drone deliveries could help Walmart better compete with e-commerce competitors like Amazon. There are about 4,700 Walmart locations across the country, and an estimated 90% of the U.S. population lives within just 10 miles of a Walmart store, according to the company.

Kroger, the largest grocery chain in the U.S., conducted a similar pilot program in 2021, testing drone deliveries of online grocery orders in Ohio and at a Ralphs store in California. The company said the technology allowed the delivery to occur at the location of the customer’s smartphone, rather than a specific address, meaning the individual could order picnic supplies to a park or sunscreen to the beach.