TAMPA, Fla. - The Hillsborough County School Board is on notice after the state’s education commissioner sent a letter Thursday, warning them to shape up or risk a takeover by the state.

Richard Corcoran called the budget situation "a point of crisis" and he threatened to take over the district if their problems are not resolved or if superintendent Addison Davis is fired.

Corcoran wrote that the board’s, "support of Superintendent Davis...is essential." And while it's unclear if his job is on the line, board chair Lynn Gray says his leadership is a concern and is a reason she called an emergency board meeting for Friday. 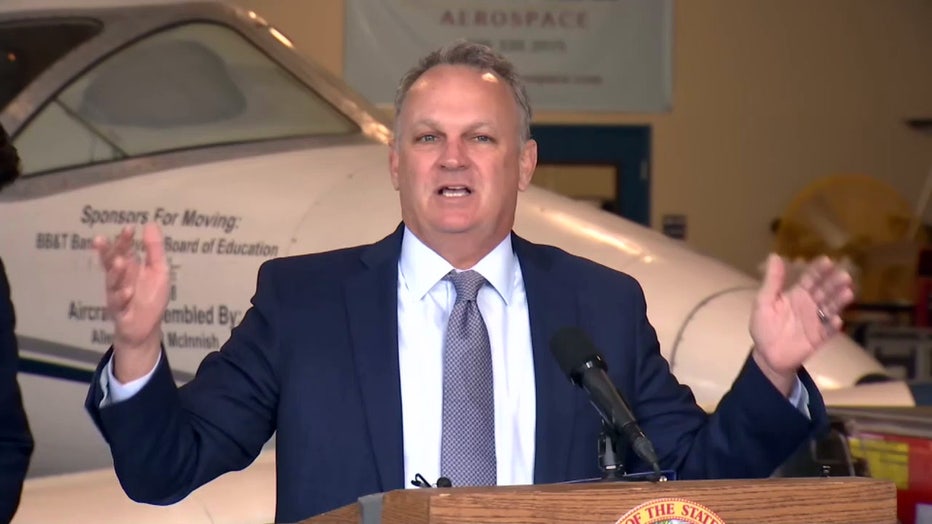 "We have a corrective plan, as you know or might have heard, for our superintendent," she said.

Gray hasn't said exactly what the meeting will be about or whether it'll involve potentially parting ways with the superintendent.

Davis has come under fire for his handling of the budget deficit, which exceeds $100-million -- a problem that existed before he arrived last year.

More than 100 teachers will not be rehired in Hillsborough

Citing school budget issues, the Hillsborough County school district sent emails to just over 100 teachers telling them they likely won't have a job next year

"There seems to be a lot of frustration with the way it's being done and the lack of collaboration, not only school-site, but the community," Gray explained.

PREVIOUS: Hillsborough County teachers informed by email they don't have a job next year

In a statement to FOX 13, Superintendent Davis said, "we have done everything to minimize the impact on individuals, but I know that [the budget decisions] have affected our teachers, students, families, and school-based administrators. All of this has been necessary to avoid a state takeover, and I look forward to working with the board in the weeks and months ahead."

State puts Hillsborough school board on notice over finances

Wednesday, Congresswoman Kathy Castor put the budget blame on the state. She says Florida is near the bottom in the U.S. for per-pupil funding, and says the state is withholding two of the three rounds of federal COVID relief funds from districts.

In Hillsborough, that's more than $700 million she believes could help stabilize this district.

"They are slow-walking to the extent that I had to write a letter to the governor to say, 'Release our funds,'" she said. "We need them in Hillsborough County."

PREVIOUS: Hillsborough County schools could be out of money by end of June, superintendent says

But in his letter, Commissioner Corcoran says that money can't be used to balance a budget. He says that would be a temporary fix.

Corcoran says the district needs a permanent solution, giving the board 20 days to come up with one or risk a state takeover.

"Should you fail to meet the responsibilities outlined in law, I will act swiftly and decisively to utilize the totality of the powers available under the law to ensure that the education of Hillsborough County’s students goes uninterrupted," he wrote.

One day after Hillsborough County’s school board voted to delay the opening of school campuses by a month, the state’s top education official says he has "grave concerns" about the plan.

Parent-turned-activist Damaris Allen is livid and believes this is the exact scenario where that federal relief money is needed.

"That's the reason this federal government is giving us this funding, because they know school districts need it to make it through this."

Chairwoman Gray says she's disappointed. She believes these types of discussions should be between the board and the superintendent and the state should not be involved.