Deputies in Flagler County had to use an airboat to nab a Florida man who led them on a chase, crashed his car into a ditch and tried to hide in a swampy pond.

BUNNELL, Fla. - Flagler County deputies plucked a Gainesville man out of a swamp and placed him in handcuffs after he fled from a traffic stop in Bunnell, crashed into a ditch and tried to hide in a pond.

According to the Flagler County Sheriff’s Office, deputies tried to pull over Alunzo Devon Peoples, 23, for driving with a suspended license on West State Road 100 near U.S. 1. But, instead of stopping, Peoples made a U-turn and sped away.

The deputies pursued Peoples from a safe distance, according to FCSO. Peoples continued traveling at a high rate of speed and ran a red light before another deputy successfully deployed stop sticks, causing his tire treads to separate, leaving the vehicle with no working tires.

Deputies say Peoples abandoned the vehicle after it ran off the road.

Law enforcement officers located him about 200 yards from the wrecked vehicle hiding in a cypress pond after his heat signature was picked up by the Volusia County Sheriff’s Office Air One helicopter. 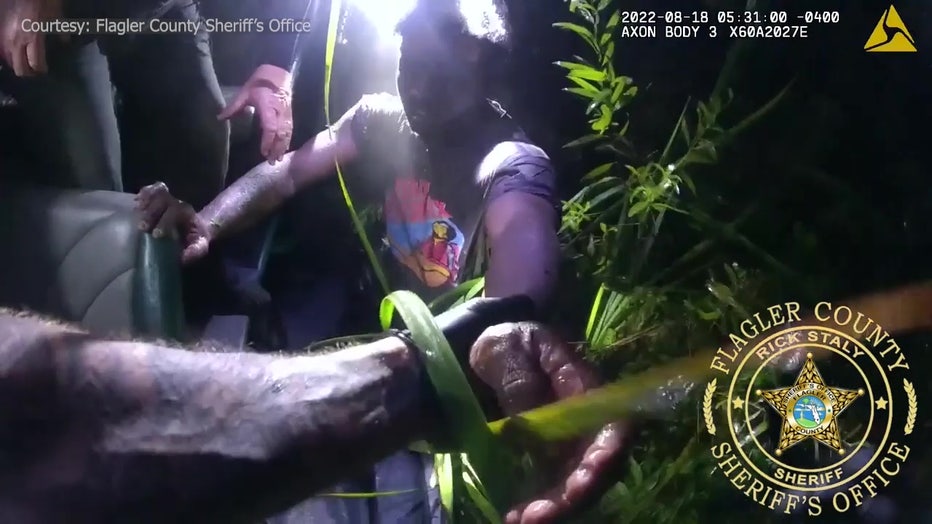 Alunzo Devon Peoples was pulled from a Florida swamp via law enforcement airboat after deputies say he led them on a chase, crashed his car and tried to hide in a pond. Courtesy: Flagler County Sheriff's Office

That’s when deputies say the FCSO’s Marine Unit put an airboat into the swamp to apprehend him and bring him back to shore after he refused to come out on his own.

"We do not give up getting our man," Sheriff Staly added. "Fleeing from a deputy is never a smart move. You only go to jail tired and, in this case, muddy and wet! He also endangered our deputies and citizens with his reckless driving. I thank our fellow Sheriff’s Offices in Volusia and Seminole counties for providing the aerial support we needed to find him and stick him in the Green Roof Inn."

Peoples is facing four charges, including felonies of fleeing and eluding and cocaine possession. Deputies found 2.56 grams of cocaine in a plastic bag that fell out of his wrecked black Chevrolet as it was being towed away, according to Flagler County Sheriff Rick Staly.

Peoples has no prior arrests in Flagler County.