LONGBOAT KEY, Fla. - On a gloomy Wednesday morning, more dead fish than people could be seen along Longboat Key.

"One of the most beautiful places in the world and you don’t even want to be there. It’s sad," said Rusty Chinnis, a Longboat Key resident and board member of Suncoast Water Keeper. "There's some days like today I don’t even want to go to the beach because of the dead fish and the red tide if there’s any surf at all you’re coughing."

Tuesday afternoon, after hearing reports of a line of dead fish Chinnis flew his drone over Longboat pass and picked up the red tide.

"It was so distinct you couldn't have drawn a more distinct line between the clear water and what it should look like here and the water that’s killing the fish," said Chinnis.

Red tide has been present off Manatee and Sarasota Counties since April. It's been patchy, but now it's registering in high to medium levels. 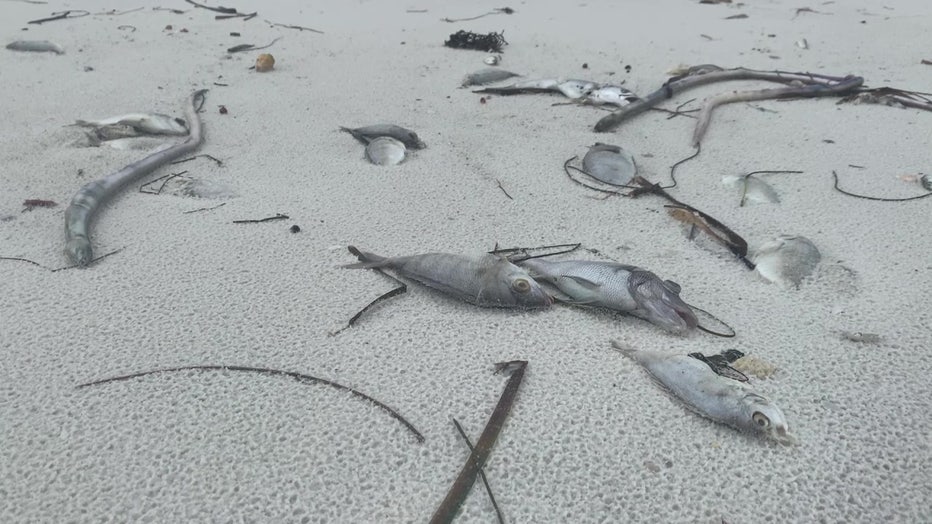 Fish have washed up along Lido, Caspersen and Siesta Key beaches. A west wind and changing tides have brought many of the dead fish ashore.

"When the tide brings it in then we get not only the dead fish and the fish kills, but it’s actually pretty high levels in some parts of Sarasota Bay particularly around the backside of Longboat Key," said Dr. David Tomasko, director of Sarasota Bay Estuary Program

Red tide is present at all 16 beaches in Sarasota County, and beachgoers will see red tide notification signs posted, along with dead fish littering some areas.

Dr. Tomasko said one way to combat red tide is to stop nutrients from entering our waterways. He explained that happens through old infrastructures like storm drains and wastewater systems and lawn fertilizer and waste from dogs can add to the problem.

"A red tide, even at moderate levels, is enough to chase people off the beach and it’s been out there for a while," shared Dr. Tomasko.