THONOTOSASSA, Fla. - At any given moment, there are 50,000 wild horses in holding facilities, most of which are in the western United States. Some of the horses are in pastures, but many are being held in dirt corrals, and while a lucky few will get adopted, those adoptions aren't always successful.

That's where a new rescue in Thonotosassa comes in. Peace Love Mustangs intends to rescue as many as they can, train them, and find them new homes.

Founders Jenna and Tammy Hogg are the mother and daughter with a small equine rescue that has now morphed into Peace Love Mustangs. We got to watch as a trainer worked with a 9-year-old mustang named Apollo, the horse that changed everything for the Hoggs.

They paid $25 for him at a Florida auction.

"I had never met a horse that was so defeated in his soul," Jenna recalled. "You looked at him, he just hung his head, his eyes were almost lifeless and it changed our whole world. So Apollo is the reason for all of this." 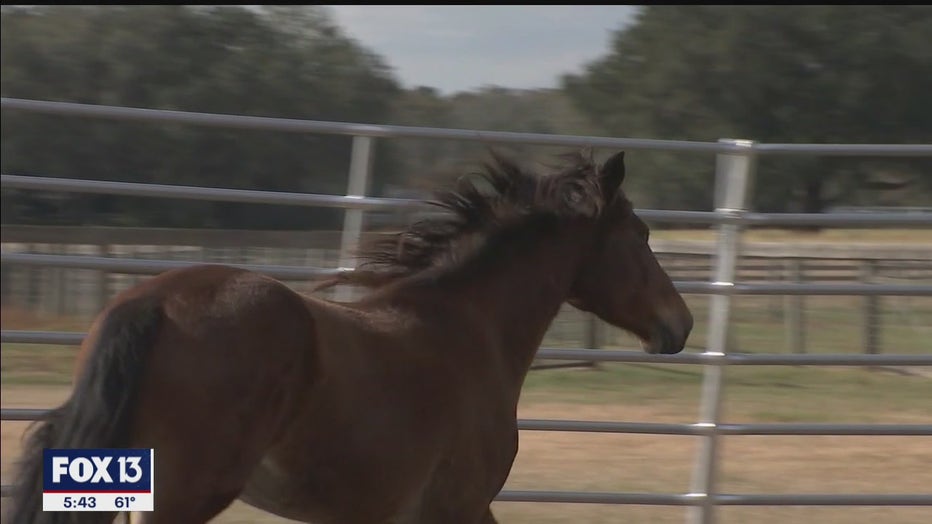 Horse trainer Bolo Hunt, who helping the Hoggs with Apollo and the other mustangs, says Apollo has come a long way after a lot of betrayal at human hands.

"To begin with, we couldn't touch him. We couldn't get near him. Now we can get near him, we can do some things. We can do almost everything but ride him at this point," Hunt said.

The Hoggs call their Thonotosassa-based rescue "Peace Love Mustangs," with a goal of getting America's wild horses out of pens and somewhere safe.

"We'll bring them to our facility. We'll train them. Give them a little TLC, help them trust again, then we'll find them that perfect home," Jenna continued.

Trust is the foundation of their training. Most wild horses are rounded up by helicopters and hauled away in trucks to holding. They get separated from their families.

"When they round them up out west, the helicopters they treat 'em like cattle. Put 'em on trucks. So their first contact, they lose the trust," Hunt explained.

Building trust takes time but Hunt says once that's established, mustangs are capable of doing anything.

For the Hoggs, these aren't just any horses. Apollo and the other mustangs are American icons and living history.

"It breaks my heart to think that a lot of these horses won't get the chance that Apollo got," Tammy Hogg added. "And we need to change that."