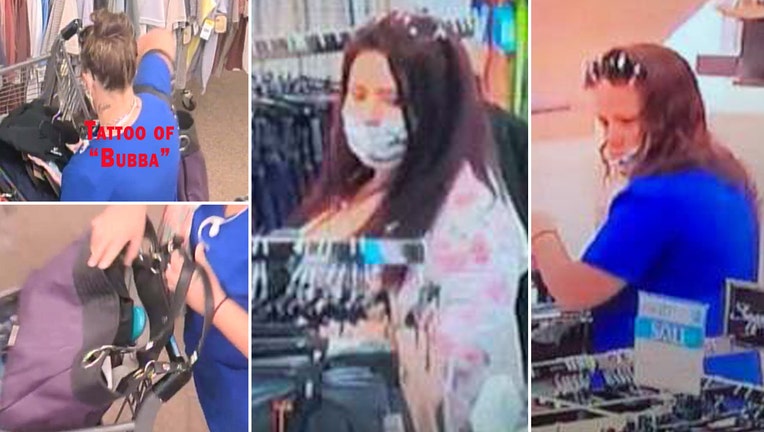 WINTER HAVEN, Fla. - Police are asking for the public's help to identify two shoplifting suspects seen on camera stealing hundreds of dollars' worth of merchandise from a Winter Garden department store.

According to police, the suspects filled up their carts with more than $640 worth of merchandise. The woman wearing blue scrubs then took her cart into the men's dressing room along with a large purple and black bag.

"She came out with much less than she entered and that bag was much fatter than when she entered," police said.

Both women then pushed their carts out of the store's front door without attempting to pay for their items.

When a store associate approached the pair, the suspects ran through the parking lot and got into a white or silver SUV, possibly a Toyota Rav4.

Security images show the woman in blue had several tattoos, with stars behind her right ear, "Bubba" on the left side of her neck, "Love" on her left, and the infinity symbol on her inner left arm.

"We thank the shoplifter who put her hair up to show her descriptive 'Bubba' tattoo on her neck. Now we need someone to identify her," police said. "We know there is someone who can help us identify her or her accomplice. And... GO!"

Anyone who recognizes the suspects is asked to call Detective Cobb at 863-401-2256. Those who wish to remain anonymous can contact Heartland Crime Stoppers at 1-800-226-TIPS (8477), and may be eligible for a cash reward.