A young mom of a 3-year-old girl was shot and killed Wednesday while she was sitting and waiting in a car and two men got into an argument and one started shooting.

DETROIT (FOX 2) - After Detroit Police arrested a suspect wanted for shooting and killing an innocent woman who was sitting in a parked car when he got into an argument at a gas station Wednesday afternoon, her family says something needs to be done about the gas station and her grandmother says the shooter responsible doesn't deserve to live.

The family of Morgan Dawkins said she would have turned 19 in October but the shooting at the gas station cut her life short.

"You can see holes in the vehicle. He shot up the car with human beings in it and he killed my granddaughter," her grandmother, Evelyn Wynn said.

Detroit Police said the man who pulled the trigger is Timothy McGhee, 22, and was considered armed and dangerous. He was arrested Thursday afternoon.

According to police, McGhee got into an argument with another man outside the gas station at Outer Drive and Conant Street in Detroit, just east of Dequindre.

Police said McGhee pulled the gun out and started shooting, hitting the 28-year-old man. But he also shot into a car parked at the gas station where two women were sitting. One of the women died in the shooting. The other woman was grazed by a bullet.

The Dawkins family says Morgan’s friend is recovering from her injuries but Morgan will never get to fulfill her dreams or see her own child, 3-year-old Riley Simone, grow up.

"She just tuned 3 last month," her mom, Theresa Dawkins, said. "She won’t remember her mother when she gets older."

A balloon release was held in memory of Morgan Saturday evening.

The family of Morgan Dawkins said she would have turned 19 in October but the shooting at the gas station cut her life short. Saturday friends and family gathered for a balloon release held in her memory.

While the family is happy that a suspect was arrested, it doesn't ease their pain.

READ NEXT: Suspect arrested in shooting of innocent woman at Detroit gas station

As this family tries to find peace, they say they’re tired of the violence and they want to see gas station owners do more to prevent criminal activity on their property.

"They shoot at this gas station all the time. They need to tear it down, burn it down, get rid of it," Wynn said. "Cause these gas station owners are not responsible and making sure hoodlums are not hanging around the gas stations." 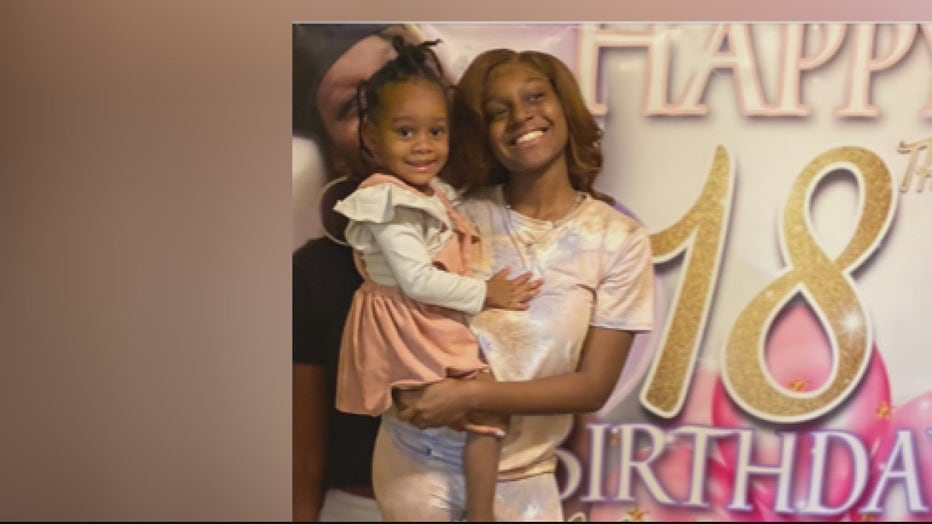 Morgan Dawkins, 18, was a mom to a 3-year-old girl. She was shot and killed while sitting in a car at a Detroit gas station.