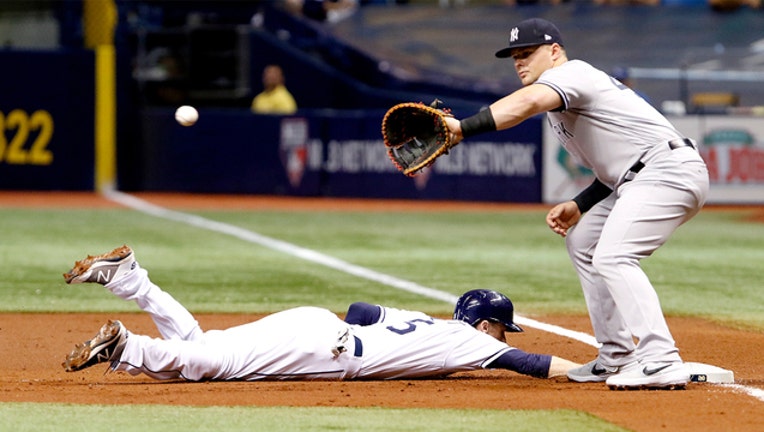 ST. PETERSBURG, Fla. (AP) - The players who combined for the run that clinched the New York Yankees' postseason berth are both hurt.

Aaron Hicks injured his left hamstring running up the first-base line in the Yankees' 4-1 win over the Tampa Bay Rays on Monday night, another concern for New York heading into next week's AL wild-card game.

Hicks' 11th-inning double on Saturday drove in Didi Gregorius, and on Sunday the Yankees learned the shortstop had torn cartilage in his right wrist during his headfirst slide across the plate.

Hicks, who had fouled a pitch off his left ankle just before the double, left Monday's game with left hamstring tightness. He aggravated the hamstring in the third inning while running to first base on a grounder to shortstop, successfully beating a relay throw and avoiding a double play. He was replaced in center fielder by Brett Gardner in the middle of the fourth.

"It's been tight for a few days," said Hicks, who will undergo an MRI on Tuesday. "I'm not too concerned. In a day or two I should be ready to go."

New York manager Aaron Boone opted to pull Hicks after watching him stretch in the outfield.

"We didn't want to risk anything," Boone said. "Hopefully it's not anything serious."

New York's win eliminated the Rays and ensured a postseason berth for Oakland, which is likely to be the wild-card opponent but also is still alive in the AL West race. The Yankees are 1½ games ahead of the Athletic for home-field advantage. At 96-60, New York is assured of its best record since going 97-65 in 2011.

The surprising Rays, with a major league-low payroll of just over $70 million for their 40-man roster, needs three victories for their first 90-win season since 2013. Tampa Bay is 84-57 following a 3-12 start.

"I think we're going to have a feel coming into next year, spring training, that's going to be a little different," Tampa Bay infielder Joey Wendle said. "We are going to have a little bit higher expectations for ourselves. This team knows it came win games against good baseball teams."

Gardner had a go-ahead single off Ryan Yarbrough (15-6) in a two-run fifth inning, and the 35-year-old made a running, leaping catch at the center-field wall in the sixth on Brandon Lowe's two-out drive with runners on first and third. Pitcher David Robertson threw both his arms skyward after seeing the grab.

"That was an unbelievable play," Robertson said. "It was the game-saving play."

Gardner hit his head against a chain-link part of the fence but said he was fine.

Catcher Gary Sanchez also is of concern to the Yankees. He had two more passed balls to raise his major league-leading total to 17 in just 72 games behind the plate. He had 16 last year, tied for most in the majors.

"I felt like he did so many good things behind the plate tonight, but a few bumps there we've got to continue to work on and continue to clean up," Boone said.

New York used eight pitchers and gave its starters extra rest ahead of the postseason, and the Rays managed just two hits - both off Sonny Gray (11-9) in two innings. Reliever Jonathan Holder started and went one innings. Zach Britton worked ninth for his seventh save.

"I don't think it's fair for them to call it a bullpen day. it's more like a closer day," Rays manager Kevin Cash said. "They are very special."

Andrew McCutchen McCutchen joined Stanton and Seattle's Nelson Cruz as the only players with at least 20 homers in each of the last eight seasons.. McCutchen homered in the third, but Tommy Pham doubled in the fourth, advanced on a passed ball and scored on Brandon Lowe's double-play grounder.

Rays OF Carlos Gomez said he was fined by the commissioner's office for an ejection by umpire Andy Fletcher after arguing a strike call in Thursday night's game at Toronto. He plans to appeal it. "I don't think it's fair," Gomez said.

Pham has reached base in a career-high 26 straight games, the longest active streak in the AL. He has hits in 25 of them.

Yankees: INF Thairo Estrada, who started the year on the DL after being shot in the right thigh during a robbery attempt in January and then had a season-ending back injury at Triple-A Scranton Wilkes/Barre, played in an Instructional League camp game. He is preparing to play in the Arizona Fall League.

Rays: CF Kevin Kiermaier (sore shoulder) was out of the lineup. ... C Nick Ciuffo left with a bruised right hand.

RHP Luis Severino (18-8) starts for the Yankees on Tuesday night against a Rays reliever.