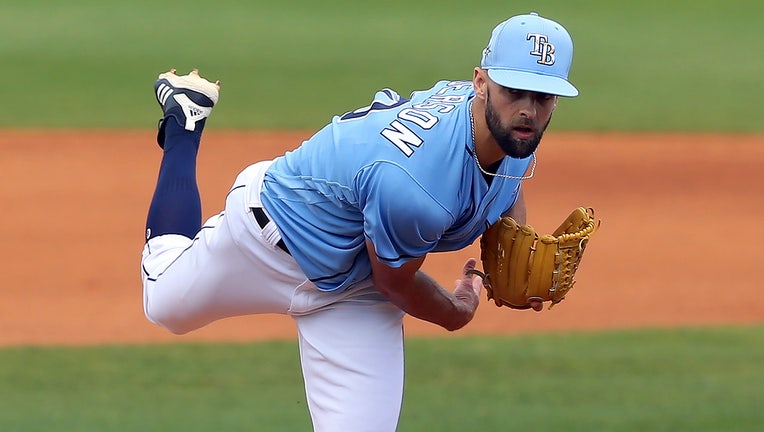 Nick Anderson of the Rays delivers a pitch to the plate during the MLB Spring Training game between the Boston Red Sox and the Tampa Bay Rays at Charlotte Sports Park in Port Charlotte, FL. (Photo by Cliff Welch/Icon Sportswire via Getty Images)

Tampa Bay reliever Nick Anderson will miss at least half the season with an elbow injury that’s not expected to require surgery and he is confident the Rays bullpen will continue to perform well without him.

"We’ve got a great team. We’ve got plenty of arms. I don’t ever look at myself as a key piece or an important person," the 30-year-old said Friday during a Zoom video conference from spring training in Port Charlotte, Florida.

"I have just as much confidence in everybody else without me," the right-hander added. "I don’t know if they feel the same way, but that’s the way I feel. We have a great group of guys. They’re going to do just fine."

Anderson, who helped the defending AL champions reach the playoffs each of the past two seasons, has a partially torn ligament in his pitching elbow that likely will sideline him beyond the All-Star break.

He was placed on the 60-day injured list Friday. The Rays selected the contract of right-hander Andrew Kittredge from Triple-A Durham.

Anderson experienced some tightness in the elbow during a spring training appearance on March 17. Concern mounted when his velocity dipped and he allowed hits to four of six batters he faced in a subsequent outing this week.

"Honestly, I am relieved in the sense that there’s a reason why I’ve kind of been feeling the way I’ve been feeling and trying to work through some stuff," Anderson said. "I don’t think anybody should be cheerful, necessarily about being injured, but: One, I don’t have to do surgery; and two, I have faith in the training staff, and it should be a great recovery."

Anderson has been a key component of Tampa Bay’s bullpen since being acquired from the Miami Marlins in July 2019. He went 2-1 with a 0.55 ERA and six saves in 19 outings during the pandemic-shortened 2020 season before appearing in 10 of the team’s 20 postseason games last fall.

"It’s tough news. Maybe the good part is, the silver lining is, that there’s no need for surgery. It’s a shutdown of no throwing for roughly eight weeks," manager Kevin Cash said. "I think any time you go eight weeks out, though, we’ll have a better sense probably in four weeks."

The Rays don’t have a designated closer, however Anderson has been the team’s top performer in high-leverage situations.

While Diego Castillo and Pete Fairbanks have been a big part of the bullpen’s late-inning success, as well, Cash said others will have to step up to compensate for the loss of Anderson.

"I don’t see how Diego and Pete can make their roles any larger. We’re going to need multiple guys to really fill the void," Cash said.

"Nobody has to go say I’m going to pitch like Nick Anderson. If they choose to, that’s fine. ... But we’re very much confident the guys we have here are a very strong bullpen," the manager added. "It’s stronger with Nick, there’s no denying that. But we still feel we have a very strong bullpen."