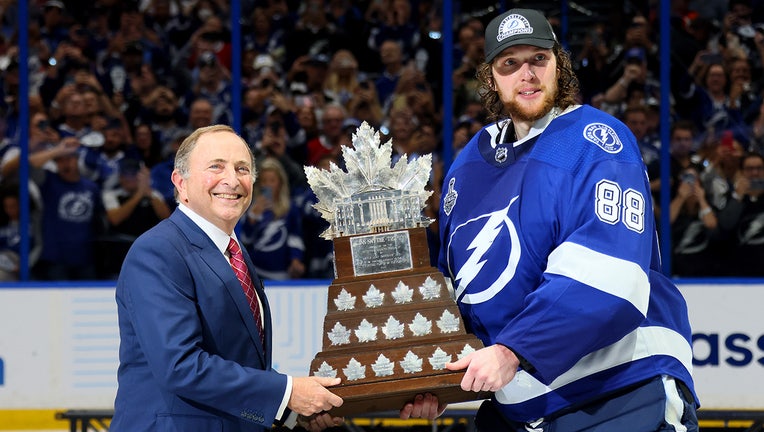 Andrei Vasilevskiy is presented with the Conn Smythe Trophy by NHL Commissioner Gary Bettman after defeating the Montreal Canadiens 1-0 in Game Five to win the 2021 NHL Stanley Cup Final at Amalie Arena on July 07, 2021 in Tampa, Florida. (Photo by B

TAMPA, Fla. - When Andrei Vasilevskiy was thrust into the 2015 Stanley Cup Final with starting goaltender Ben Bishop injured, he was a shy, unknown player at the beginning of his NHL journey.

Six years later, he’s a two-time Stanley Cup champion at the peak of his career after backstopping the Tampa Bay Lightning to a second consecutive title. Continuing to validate the organization’s faith in him, Vasilevskiy had a shutout in all four series clinchers, never lost back-to-back games and won the Conn Smythe Trophy as playoff MVP.

"It was a big surprise," Vasilevskiy said. "I couldn’t believe it."

His five consecutive series-clinching shutouts dating to the 2020 final are a league record. After carrying the Lightning to another championship, Vasilevskiy sipped a sports drink leaning against the bench while his teammates celebrated — a much deserved breather while fans chanted, "Va-sy! Va-sy!"

Despite teammate and Russian countryman Nikita Kucherov continually calling him the best and saying he’d be MVP, Vasilevskiy said — with the Conn Smythe Trophy next to him — "I still can be better."

"The whole team deserves it for sure," Vasilevskiy said. "We were able to shut down the teams four times in a row in clinching games and that’s just amazing. it’s not about me. It’s about our team."

Weeks away from his 27th birthday, Vasilevskiy is a much different goalie and more confident person than he was during his first trip to the final, a loss to Chicago, and the result of that is another chance to hoist the Cup. 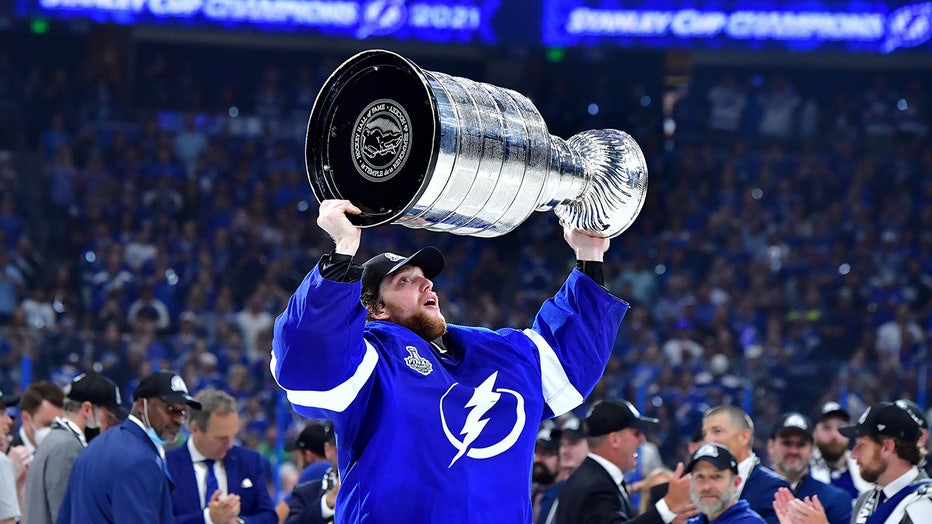 Vasilevskiy was at his best when Tampa Bay needed him to be. He stopped 135 of 141 shots in games after a loss, including Wednesday night’s season finale. He was a rock in a Game 2 win during the final, stopping 42 of 43 shots when the Montreal Canadiens tilted the ice toward him.

"Just the absolute competitive gamer that we know he is," veteran defenseman Ryan McDonagh said. "Night in, night out (the) backbone of this team."

That was Bishop’s role in 2015 before a torn groin derailed his Cup final. Vasilevskiy had started a total of 13 NHL games at that point and had the spotlight on him at age 20 on hockey’s biggest stage.

Coach Jon Cooper said Vasilevskiy had to learn quickly, and he has. The Russian netminder is now squarely in the debate as the best in the world, a label that had often belonged to Montreal’s Carey Price.

"Torches get passed and I think Carey is still carrying the torch but it’s getting passed to guys like Vasy," Cooper said. "It’s the mental makeup. Carey Price has a demeanor about him that it exudes confidence. And (Vasilevskiy) has an ability to turn the page. He has an ability to play at big moments, and he’s grown into that."

Tampa Bay wouldn’t have won a second consecutive championship without Vasilevskiy’s growth. His play this run made him playoff MVP over Kucherov, who again led the Lightning in scoring and joined Wayne Gretzky and Mario Lemieux as the only players with 30-plus points in consecutive postseasons.

Kucherov has seen and appreciated Vasilevskiy’s value for a decade.

"His compete level is as high as it can be," Kucherov said. "I remember him when he was 16. He was always the guy that cares about the game and wants to be better and he wants to be No. 1. And, as we can see, he is."