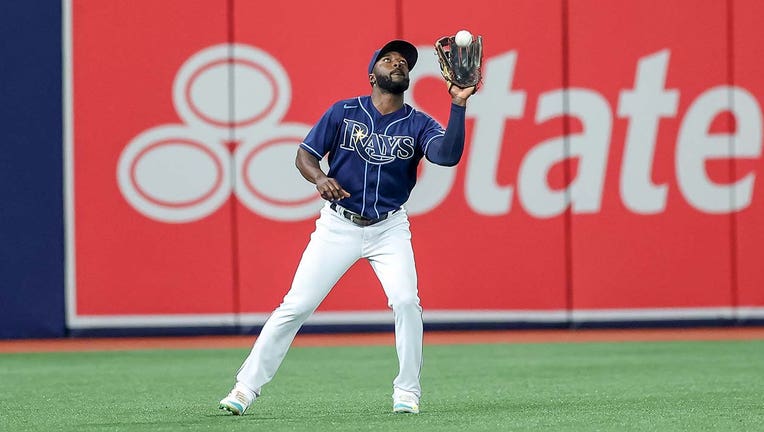 ST. PETERSBURG, FL - JUNE 8: Randy Arozarena #56 of the Tampa Bay Rays makes a catch on a fly ball from Tommy Edman #19 of the St. Louis Cardinals during the third inning of a baseball game at Tropicana Field on June 8, 2022 in St. Petersburg, Florid

Arozarena, the 2021 AL Rookie of the Year, was a St. Louis prospect with 19 games of major league experience when he was obtained from the Cardinals in a January 2020 trade. He had an RBI double in the first inning and a two-run single in the seventh to pace an 18-hit outburst for the Rays.

Veteran catcher Yadier Molina pitched a scoreless eighth for St. Louis, entering to cheers from red-clad Cardinals fans in a crowd of 12,906. He received a standing ovation when he struck out pinch-hitter Isaac Paredes.

Corey Kluber (3-2) shut down the Cardinals for five innings before fading quickly in the sixth. St. Louis loaded the bases with no outs on a walk and two singles, including Paul Goldschmidt's hit through the middle that extended the slugger's career-best on-base streak to 44 games.

Tyler O'Neill, who had a solo homer off Kluber in the fourth, chased the two-time AL Cy Young Award winner with a two-run single that trimmed the Cardinals' deficit to 5-3.

The Rays escaped further damage, with reliever Jason Adam getting Brendan Donovan to ground into a double play and Juan Yepez to fly out at the wall in left field.

Choi, Arozarena and Bruján had RBI doubles in the first off left-hander Packy Naughton (0-2). Ramírez doubled off reliever Johan Oviedo in the second, driving in the final run charged to the Cardinals starter.

Kluber, meanwhile, yielded three runs and six hits in five-plus innings. He walked one and struck out five.

The Rays improved to 6-1 in interleague games this year. They are a major league-best 21-6 since the start of last season, including 13-1 at home.

Cardinals: Nolan Arenado was not in the lineup after being hit by a pitch in the right knee during the 10th inning of Tuesday night's 4-2 loss to the Rays. The Gold Glove third baseman said he expects to play Thursday.

Rays: RHP Shane Baz, who had arthroscopic elbow surgery in March, has been penciled in to make his season debut Saturday at Minnesota.

The finale of a three-game series, with lefty Shane McClanahan (6-2, 2.10 ERA) starting for the Rays. The Cardinals had not announced a starting pitcher.