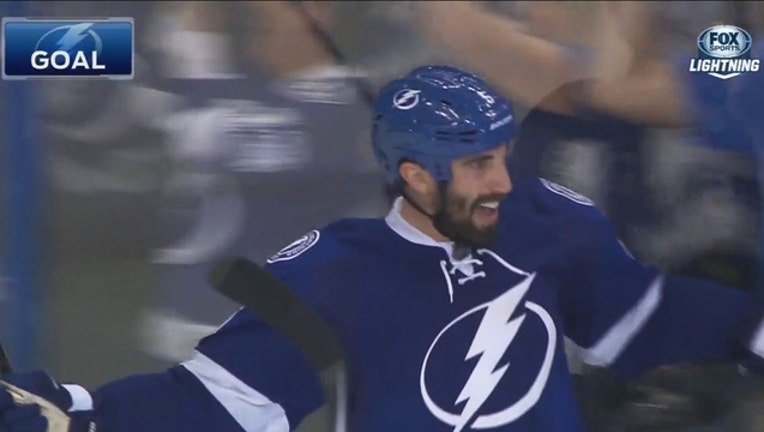 Still shot shows the moment just after the Lightning's final goal, which resulted in an overtime win for their season opener against the Philadelphia Flyers.

TAMPA (FOX13) - Jason Garrison scored his second goal of the game in overtime, and the Tampa Bay Lightning beat the Philadelphia Flyers 3-2 on Thursday night.

Garrison's game-winner came on a breakaway at 2:17 of the extra period, which featured end-to-end action in the NHL's first 3-on-3 OT of the regular season.

The NHL moved overtime from 4-on-4 to the new setup this season.

Tampa Bay's Ben Bishop faced his second penalty shot 1:27 into overtime and made a pad save on Scott Laughton.

It was the first NHL game for Philadelphia coach Dave Hakstol, who spent the past 11 seasons coaching at the University of North Dakota. Seven of his teams at North Dakota reached the NCAA Frozen Four.

The Lightning also got a goal from Ryan Callahan. Tampa Bay unveiled its 2015 Eastern Conference championship banner before the game.

After Read beat Bishop from the low slot at 10:14 of the second, Schenn put the Flyers up 2-1 with a rebound power-play goal 1:49 later.

Callahan got Tampa Bay even at 2 on the rebound during a power play with 1:38 left in the second.

Garrison opened the scoring from the blue line when his shot through traffic eluded Steve Mason 1:25 into the second.

Mason kept it a one-goal game less than a minute later by stopping a breakaway shot by Ondrej Palat.

Flyers captain Claude Giroux had a penalty shot with 6:13 left in the first, but sent a soft shot wide of the net after several stick-handling moves.

NOTES: Lightning captain Steven Stamkos, in the final season of a five-year, $37 million contract, had three shots but was pointless. Without a new deal, he could become a free agent after the season. ... Former Tampa Bay captain Vincent Lecavalier and C Sam Gagner were healthy scratches for the Flyers. ... Tampa Bay C Cedric Paquette (foot) is practicing but didn't play.