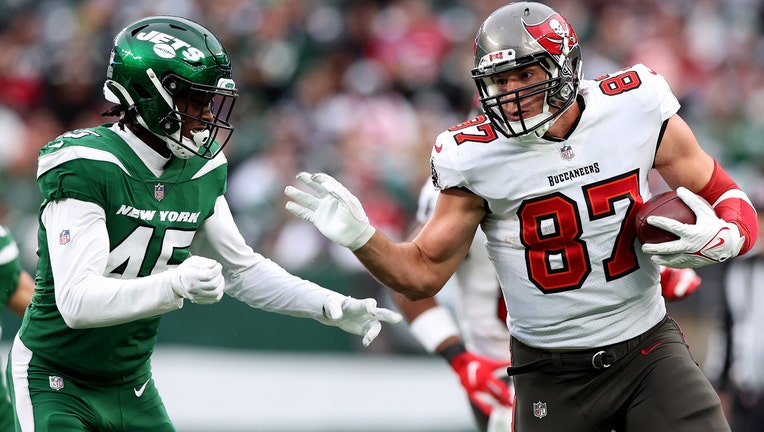 EAST RUTHERFORD, NEW JERSEY - JANUARY 02: Rob Gronkowski #87 of the Tampa Bay Buccaneers carries the ball for a first down over Hamsah Nasirildeen #45 of the New York Jets in the fourth quarter of the game at MetLife Stadium on January 02, 2022 in Ea

RUTHERFORD, N.J. - Antonio Brown was kicked off the Tampa Bay Buccaneers after a bizarre, shirtless exit from the field before Tom Brady coolly led the Bucs on a 93-yard drive in the final minutes for a 28-24 victory over the New York Jets on Sunday.

Coach Bruce Arians said after the game that Brown was off the team.

"He is no longer a Buc," Arians said.

Brown's mid-game meltdown came late in the third quarter with Tampa Bay trailing 24-10. He appeared animated while talking to teammate Mike Evans when he stripped off his pads, jersey, gloves and T-shirt — tossing the gloves and T-shirt into the stands — and then walked bare-chested down the sideline and into the end zone. He then waved to fans as jogged through the end zone and into the tunnel at MetLife Stadium. 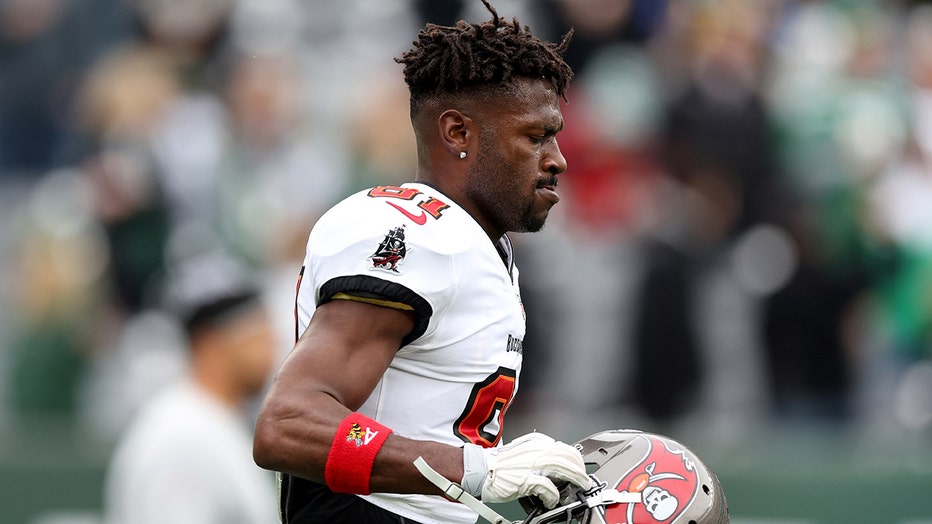 EAST RUTHERFORD, NEW JERSEY - JANUARY 02: Antonio Brown #81 of the Tampa Bay Buccaneers looks on against the New York Jets during the game at MetLife Stadium on January 02, 2022 in East Rutherford, New Jersey. (Photo by Elsa/Getty Images)

Brady connected with Cameron Brate for a touchdown on fourth-and-goal from the 4 shortly after Brown's exit, and the QB finished the Bucs' rally with a 33-yard touchdown pass to Cyril Grayson with 15 seconds left.

The Bucs stuffed Jets QB on fourth-and-2 at the 7 for no gain with New York trying to seal the victory, giving Brady and the Bucs the ball back with 2:12 left.

It was more than enough time.

Brady marched the Buccaneers (12-4) down the field on nine plays, zipping a pass to Grayson — who was elevated from the practice squad — for the go-ahead score. It was Brady’s third TD pass of the game and 40th of the season, joining him with Drew Brees as the only players to throw for 40 touchdowns in consecutive seasons.

He finished 34 of 50 for 410 yards, the three TDs and an interception for Tampa Bay, which had Arians back after he tested positive for the coronavirus earlier in the week.

Le’Veon Bell ran in the 2-point conversion against his former team, forcing New York to need a touchdown. But the Jets (4-12) ran out of time.

The game featured the largest age gap between starting quarterbacks since at least 1950, with the 22-year-old Wilson facing the 44-year-old Brady.

The Jets took a two-touchdown lead on Ty Johnson's 1-yard run that capped their opening drive of the second half.

New York took a 7-0 lead on a razzle-dazzle play to cap an impressive opening drive. Running back Michael Carter lined up in the wildcat — with Wilson behind the right guard — took the direct snap and flipped it to wide receiver Braxton Berrios, who went in untouched around the right end.

Carter had a 55-yard run early in the drive to get the Jets to the Buccaneers 12.

Brady and the Bucs marched right down the field on their opening possession with Evans — back after missing last week’s game with a hamstring issue and spending time on the COVID-19 list this week — catching a 4-yard touchdown pass on a fade to tie it at 7.

It was the seventh opening-drive touchdown this season for Tampa Bay.

Wilson, who was 19 of 33 for 234 yards and a TD, answered right back with Berrios catching a short pass and then diving for the end zone for a 9-yard touchdown and a 14-7 lead.

It was a costly 13-play, 74-yard drive for the Jets, though, as both Carter (concussion) and left tackle George Fant (left knee) were injured and didn’t return.

Brady quickly got the Buccaneers to the Jets 23 on passes of 31 yards to Evans and 21 to Brown, but New York’s defense stiffened and got the first third-down stop of the game. Tampa Bay settled for a 39-yarder by Succop to make it 14-10.

Brandin Echols intercepted Brady on Tampa Bay’s last possession of the first half and returned it 30 yards to the Jets 48. New York turned it into points on Eddy Pineiro’s 51-yard field goal with 1 second left.

Brady, who improved to 31-8 against the Jets, also tied Green Bay’s Aaron Rodgers as the only players with three seasons of 40 or more TD passes.

Buccaneers: RB Ronald Jones (ankle) and DB Rashard Robinson (groin) didn’t come back after leaving in the second half.

Jets: In addition to Carter and Fant, TE Dan Brown left in the second quarter with a hip injury and didn’t return.

Buccaneers: Finish the regular season by hosting the Carolina Panthers next Sunday.

Jets: Wrap up their season at Buffalo next Sunday against the AFC East-rival Bills.