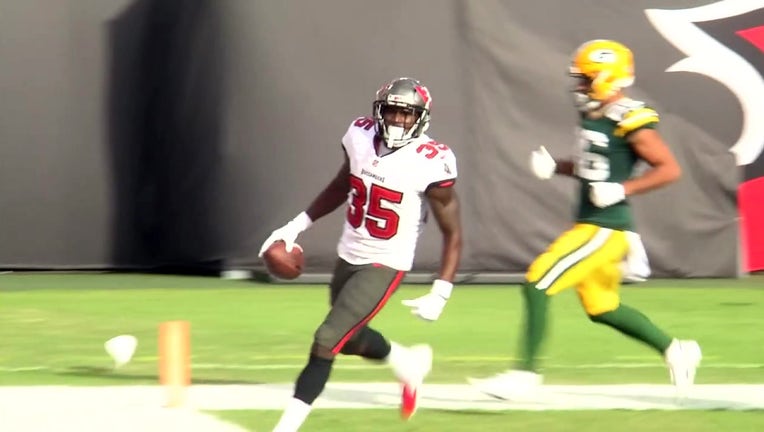 Jamel Dean scores on a 32-yard interception return against the Packers.

"We've got great stars on the offensive side of the ball, but like I said at the beginning of the season, we want this team to be a defensive team," second-year linebacker Devin White said.

Six games into Brady's first season in Tampa Bay, the NFL's top-ranked defense is indeed doing its part to bolster the six-time Super Bowl champion quarterback's bid to transform the Bucs into championship contenders. The Bucs (4-2) haven't made the playoffs since 2007, a 12-season drought that's second longest in the league.

Brady outplayed Aaron Rodgers during Sunday's 38-10 rout of the previously unbeaten Green Bay. The bigger story, though, was a defense that had five sacks, intercepted Rodgers twice, returned one of the picks for a touchdown, and limited the league's highest scoring team to 10 points and 201 yards -- 52 after halftime.

The Packers rushed for 94 yards, ending Tampa Bay's impressive streak of three consecutive games holding opponents under 50 on the ground. Nevertheless, the unit extended a stretch of not allowing 100 yards rushing to 12 consecutive games dating to last season.

"It's definitely a standard that we have to uphold now. Especially with the coaching staff we have, they're not going to accept anything less," linebacker Lavonte David said of the performance against the Packers.

Tampa Bay leads the league in rushing defense, allowing just 64.3 yards per game -- down from 73.8 a year ago, when the Bucs also had the No. 1 rushing defense.

What's new is the unit ranks first in total defense as well at 282 yards per game. Opponents gained 343.9 per game last season, when Tampa Bay finished 7-9 and missed the playoffs.

"We've got to be able to be consistent, not get too high, not get too low, and just stay the course," David said. "We know we played a good football game against a great football team, but now that's in the past. We have to keep on moving forward and keep on stacking them."

Since losing NT Vita Vea to a season-ending leg injury on Oct. 8, the Bucs have been in the market for experienced depth on the interior defensive line. They addressed the need by acquiring Steve McLendon from the New York Jets after the veteran nose tackle played Sunday in Miami.

"He's got to go through the protocols and pass the physical, but he played (Sunday)," Arians said. "We all know Steve. He's really a quality human being and a hell of a player. ... Hopefully we can get him past the physical and get the trade through."

The Bucs are 3-0 at home, where they've struggled for much of the past decade.

"Every year our goal is to win them all at home, and if you split them on the road, you're 12-4," Arians said. "We have to win at home, and we have to play (well) at home. That's been hammered into them, and I think they've all accepted that."

A rare week in which so much went right against the Packers that there was little to be unhappy about Monday.

RB Leonard Fournette (ankle) has been inactive two of the past three games.

"No sense in risking him tweaking it and losing him for another month. Just get him healthy. ... We'll need him down the stretch for sure," Arians said.

0 -- as in no penalties, no turnovers, no sacks allowed against the Packers.

The Bucs were flagged 11 times during a one-point loss at Chicago two weeks ago and entered the Green Bay game as the most penalized team in the league.

"When (Arians) puts an emphasis on something, you got to get the job done or you won't be the one doing the job," White said. "He addressed the issue. Everyone corrected themselves, looked in the mirror and took care of what really beat us (against the Bears)."

While they're undefeated at home, the Bucs are 1-2 on the road. They'll get a chance to improve on that when they travel to Las Vegas on Sunday night.