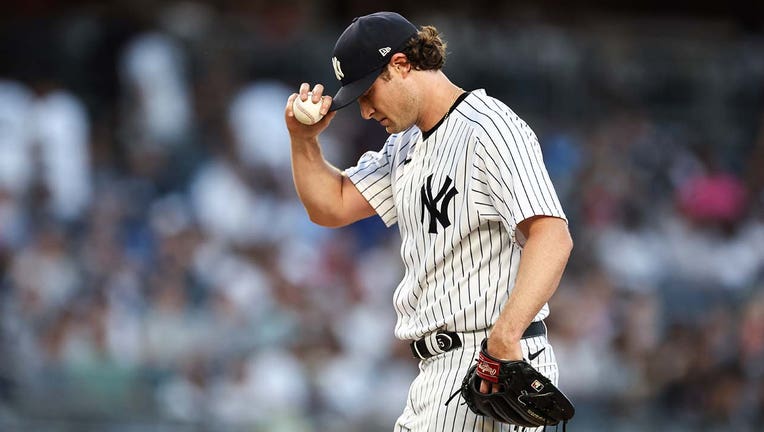 NEW YORK, NEW YORK - JUNE 14: Gerrit Cole #45 of the New York Yankees adjusts his hat on the mound during the fourth inning of the game against the Tampa Bay Rays at Yankee Stadium on June 14, 2022 in the Bronx borough of New York City. (Photo by Dus

NEW YORK - Gerrit Cole put a career-worst pummeling behind him with six sharp innings, and the New York Yankees capitalized on shaky defense by the Tampa Bay Rays for a 2-0 victory Tuesday night.

The AL East-leading Yankees won their fifth straight as they played the first of six games in nine days against third-place Tampa Bay. New York entered Tuesday nine games ahead of the two-time defending division champs and eight up on the Blue Jays, who will host the Yankees for three games this weekend.

New York had just five hits but improved to 45-16, the best 61-game start across baseball since Seattle in 2001.

The Yankees were without third baseman Josh Donaldson, who served a one-game suspension from Major League Baseball for comments to White Sox star Tim Anderson regarding Jackie Robinson. Donaldson’s ban was upheld on appeal.

Cole (6-1) allowed a career-most five homers against Minnesota in his previous outing but bounced back with a mostly stress-free start. The right-hander struck out seven, walked one and allowed five hits, all singles.

Clay Holmes pitched a scoreless ninth for his 10th save, completing the Yankees' six-hitter and their 10th shutout.

The Rays made two errors in the fourth that allowed New York to take a 2-0 lead.

After Giancarlo Stanton's one-out walk, right fielder Manuel Margot dropped Gleyber Torres' routine popup near the foul line. Isiah Kiner-Falefa followed with a two-out single, and left fielder Randy Arozarena had a chance to throw out Stanton at the plate. Arozarena's high throw sailed so far over the catcher that Stanton scored easily and Torres was able to follow him home.

Tampa Bay has allowed 40 unearned runs this season, second-most in the majors behind the Chicago White Sox.

Cole bemoaned throwing too many pitches down the middle during his shellacking by the Twins last week. He adjusted Tuesday by essentially abandoning his cutter, throwing it a season-low three times.

After giving up homers to the first three hitters in Minnesota, Cole worked around Harold Ramirez’s single for a scoreless first inning against Tampa Bay.

He largely cruised until loading the bases with one out in the sixth, but then he induced a 6-4-3 double play from the speedy Arozarena to preserve the shutout. Cole skipped off the mound, pointing at his middle infielders. Torres made a great play at second base earlier in the inning to keep his foot on the bag receiving Cole's errant throw on a weak grounder.

Rays shortstop Taylor Walls retired DJ LeMahieu with a stellar play leading off the first, ranging up the middle for a slow grounder, spinning and throwing as he fell into center field. Walls' throw bounced twice before first baseman Ji-Man Choi did the splits to scoop it just before LeMahieu touched first.

Kiner-Falefa made a gem in the seventh from shortstop after Kevin Kiermaier's grounder was tipped by reliever Wandy Peralta. Kiner-Falefa changed course, barehanded the ball between second and first base, and whipped it over in time for the out.

Rays: C Mike Zunino was sent for an MRI after his sore left shoulder didn't respond to treatment as hoped. ... SS Wander Franco (strained right quad) did agility work Tuesday and is progressing well. ... RHP David Hess, who had treatment in the offseason for a cancerous chest tumor, went two perfect innings including three strikeouts for the FCL Rays on Monday against the Twins.

Yankees: LHP Aroldis Chapman (Achilles tendinitis) threw a bullpen on the field, and he could face live hitters his next time on the mound. ... RHP Jonathan Loaisiga (right shoulder inflammation) has resumed throwing. ... RHP Domingo Germán (right shoulder impingement syndrome) will throw three innings to hitters Wednesday and then could begin a minor league rehab assignment.

Rays LHP Shane McClanahan (7-2, 1.87) and Yankees LHP Nestor Cortes (5-2, 1.96) face off in a showdown of surprising early season Cy Young Award contenders. McClanahan pitched a career-high eight innings in his previous start against St. Louis, allowing only an unearned run in a 2-1 win — he says he's never pitched nine innings at any level. Cortes stumbled in his previous outing against Minnesota, allowing two homers for the first time this season while giving up four runs in 4 1/3 innings.