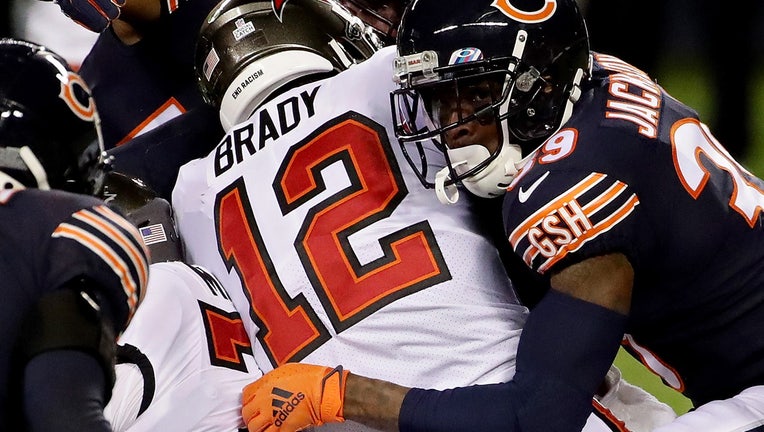 Tom Brady attempts a sneak while being tackled by Eddie Jackson in the second quarter at Soldier Field on October 08, 2020 in Chicago, Illinois. (Photo by Jonathan Daniel/Getty Images)

CHICAGO - Nick Foles beat Tom Brady again, throwing for 243 yards and a touchdown, and Cairo Santos kicked a 38-yard field with 1:17 remaining to lead the Chicago Bears to a 20-19 victory over the Tampa Bay Buccaneers on Thursday night.

Brady never lost to Chicago in five meetings as a member of the Patriots. But facing Foles for the first time since New England fell to Philadelphia in Super Bowl 52, the six-time champion once again came up short.

Brady threw for 253 yards and one touchdown. But the Buccaneers (3-2) came up short after winning three in a row. Khalil Mack had two sacks.

DeAndre Houston-Carson broke up Brady's fourth-down pass with 33 seconds left after Santos kicked the go-ahead field goal, and the Bears (4-1) bounced back from a lackluster loss to Indianapolis.