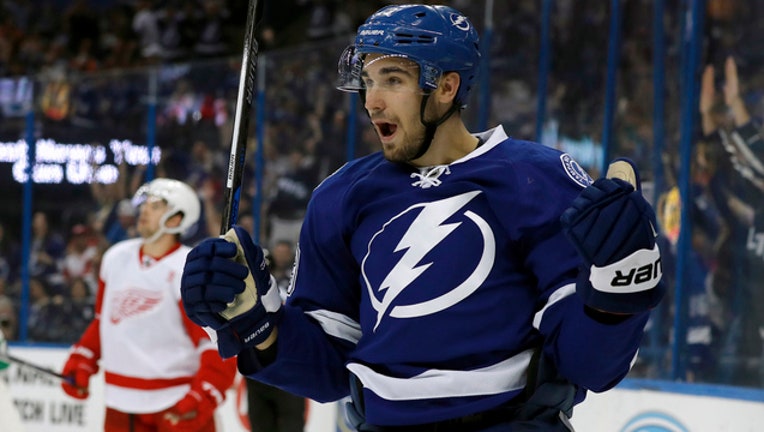 Tyler Johnson scored a go-ahead power-play goal off a nifty pass from Steven Stamkos midway through the third period and the Lightning beat the Detroit Red Wings 6-4 in the season opener for both on Thursday night.

"You'd like to not give up four goals but all you can ask for is a win," Johnson said. "We have a lot of confidence in this team. We've been through a lot together."

The Lightning beat Detroit in the first round of the playoffs each of the last two years en route to the Stanley Cup final in 2015 and the Eastern Conference final last season.

Johnson was positioned at the right circle and redirected Stamkos' feed past Petr Mrazek at 8:34 to put the Lightning up 4-3, just 5 seconds after Detroit was called for too many men on the ice.

"As that game went on, we got stronger," Tampa Bay coach Jon Cooper said.

Thomas Vanek scored two goals for the Red Wings. Frans Nielsen, signed to a $31.5 million, six-year free agent deal by Detroit, had a goal and an assist.

The Red Wings were without Pavel Datsyuk at the start of a season for the first time since 2000. He left the NHL to return to Russia to continue his career near his family.

Boyle tied it at 3 during a 2-on-1 early in the third. Killorn added a late power-play goal before Danny DeKeyser cut the Red Wings' deficit to 5-4 when his center-ice shot went off the glass along the left wing boards and shot past Ben Bishop with 2 minutes left.

Filppula secured the win with an empty-netter.

Vanek continued his career-long success against Tampa Bay by scoring twice, including a power-play goal, in the opening 8:26 of the game. He has 27 goals and 45 points in 41 games against the Lightning.

"He knows how to score, and you saw that tonight," Detroit left wing Henrik Zetterberg said.

The Red Wings signed Vanek to a one-year, $2.6 million deal shortly after Minnesota bought out the last year of the forward's three-year, $19.5 million deal. Vanek had a career-low 18 goals last season.

After Drouin scored on the power play midway through the second, Nielsen made it 3-1 just 55 seconds later.

Paquette scored from a tough angle later in the second.

"If that was your first hockey game, that was a pretty good one to go to," Cooper said.

Lightning: Host New Jersey on Saturday night in the second game of a season-opening four-game homestand.