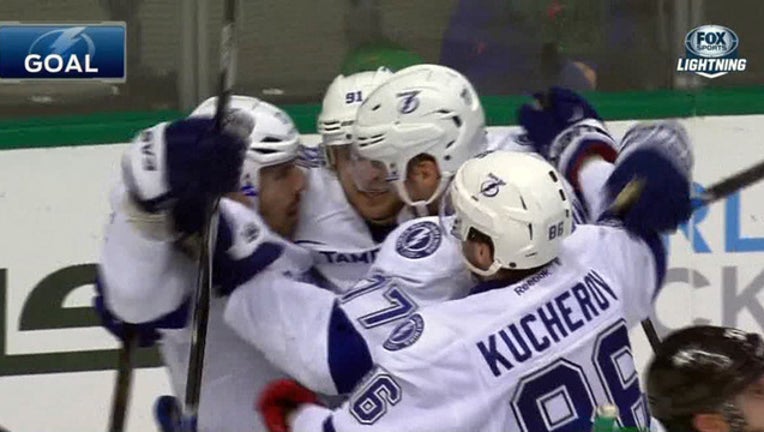 TAMPA (FOX 13) - Just in time for the Lightning's season opener, general manager Steve Yzerman announced the re-signing of forward Nikita Kucherov to a three-year contract worth an average of $4.766 million per season.

Kucherov, 23, skated in 77 games with the Lightning during the 2015-16 season, recording 30 goals and 66 points to go along with 30 penalty minutes. He led the team for points and was second for both assists (36) and goals. Kucherov also set career highs for goals, points, power-play goals (nine) and game-winning goals (four). He ranked second on the Bolts for shots (209) and power-play goals, while also pacing the club with 19 multi-point games.

The 5-foot-11, 178-pound forward also skated in 17 Stanley Cup Playoff games with the Lightning last season, posting 11 goals and 19 points to go along with a plus-13 rating. Kucherov led the Bolts during the playoffs for both goals and points. He finished second for goals and sixth for points in NHL in playoff scoring.

Kucherov has skated in 211 career NHL games, all with Tampa Bay over the past three seasons, collecting 68 goals and 149 points to go along with 81 penalty minutes and a plus-50 rating. He's also appeared in 45 career playoff games, recording 22 goals and 42 points. Kucherov represented Team Russia at the World Cup of Hockey in Toronto last month, posting two goals and three assists in four tournament games. He ranked tied for first on Russia in both goals and points.

Kucherov was originally drafted by the Lightning in the second round, 58th overall, at the 2011 NHL Draft. He will rejoin the team for their final practice on Wednesday in Brandon.

The Lightning open the season at home against Detroit Thursday at 7:30.