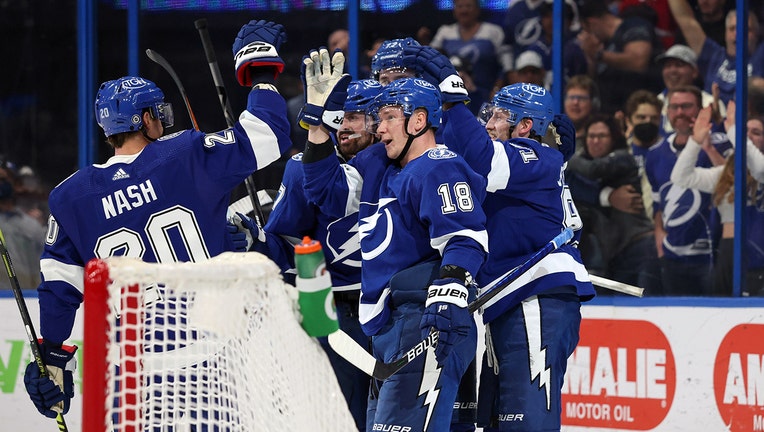 TAMPA, FL - DECEMBER 28: Ondrej Palat #18 of the Tampa Bay Lightning is congratulated by Riley Nash #20 after scoring the game-winning goal in overtime against the Montreal Canadiens at the Amalie Arena on December 28, 2021 in Tampa, Florida. (Photo

Perry got the equalizer with 19.7 seconds left in regulation and the Lightning net empty before Palat won it off a pass from Victor Hedman.

"Scoring a late goal to tie is always exciting," said Brayden Point, who had two goals and assisted on Perry’s goal in his return from an injury. "Luckily enough we get the two points in overtime. There was a lot of emotion."

It was the first NHL game since the Lightning won 4-3 at Vegas on Dec. 21 in the only game played that night. Dozens more were postponed over the past week-plus as the league turned a Christmas break scheduled to last three days into a six-day hiatus because of COVID-19 outbreaks and protocols.

"Probably a little predictable the way things played out with where both teams’ lineups were and the fact you’re coming off a break," Lalonde said. "I told the guys, again, huge credit for them to find a way like we’ve done all year long, hanging in there."

David Savard ended a 49-game goal drought to put the Canadiens up 4-3 with 6:51 left in the third. Kale Clague had tied it at 3 for Montreal earlier in the third on his first NHL goal, coming in his 39th career game.