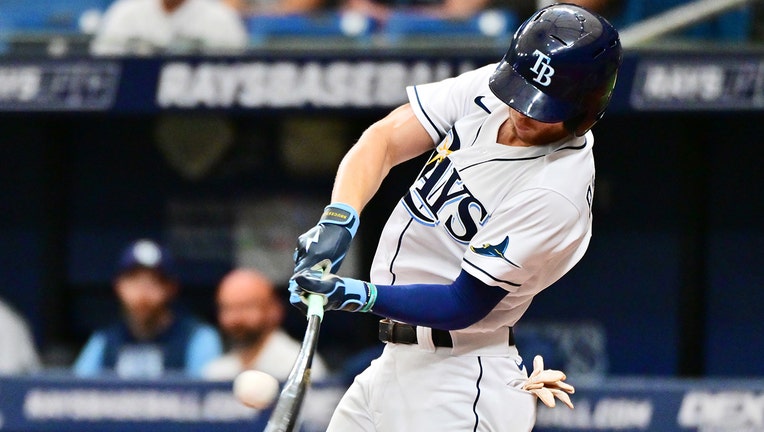 "The ball didn’t bounce or way today," said Servais, who had been ejected just before the bounce that beat the Mariners on Thursday.

Brett Phillips drove in the winning run by bouncing a tiebreaking single off pitcher Chris Flexen's leg in the seventh inning.

With Harold Ramirez on third base and two out in a 1-1 game, Phillips grounded a comebacker at Flexen (1-3) that caromed off the pitcher's right leg toward the left side of the infield, which was vacated by a shift. Ramirez scored easily.

"It would have been interesting if he had let that ball go," said Phillips, who drove in both of Tampa Bay's runs with two hits. "But that’s the human element of the game, trying to be competitive and trying to knock it down."

The Mariners were set up for an easy groundout if Flexen had been able to get out of the way.

"It’s a natural reaction. Obviously we were in a shift. It’s all lined up, guys were in the right spot," Servais said. "But we've got to get (Flexen) more than one run. You've got to hit with runners in scoring position."

J.P. Feyereisen (1-0) got the win after pitching a perfect seventh and eighth.

Ryan Thompson, the Rays' sixth pitcher of the game, struck out pinch-hitter Tom Murphy with a runner on second to end the game and earn his second save.

Another bounce put the ball in Phillips' hands in the ninth. Julio Rodriguez hit a blooper off the glove of second baseman Brandon Lowe, but Phillips, playing right field, picked it up and forced out a runner at second base.

"This was a great baseball game today. A pitchers’ duel — Rays bullpen vs. Chris Flexen," Phillips said. "You've got to give credit where credit is due. Flexen did a great job keeping us off balance.

"We won so it was a good break. If we had lost and all that would have happened, maybe a different answer."

Eugenio Suarez drove in Seattle's run with a triple in the first off starter Jeffrey Springs.

Flexen gave up two runs on six hits in 6 2/3 innings while striking out four.

Servais, who had two calls successfully reversed by replay challenges, was ejected by home plate umpire Shane Livensparger after a called third strike on Rodriguez in the sixth.

Mariners: LHP Marco Gonzales had a normal throwing routine Thursday after being struck on the left wrist by a 109 mph line drive in the first inning Wednesday night. The Mariners have not determined whether Gonzales will make his next start Monday at Houston. ... IF Evan White (sports hernia) was transferred to the 60-day injured list.

Servais said he believes Rodriguez is being treated unfairly by umpires.

"What’s going on with Julio Rodriguez right now is not right," he said. "I think that’s his 15th called strikeout — called third strikes that are out of the strike zone. I give all the credit in the world to Julio. Not many people could handle things the way he has. He’s not barked back, he has not changed his approach, he’s not chasing balls out of the strike zone, but it’s wrong. He’s 21 years old. Let the kid play."