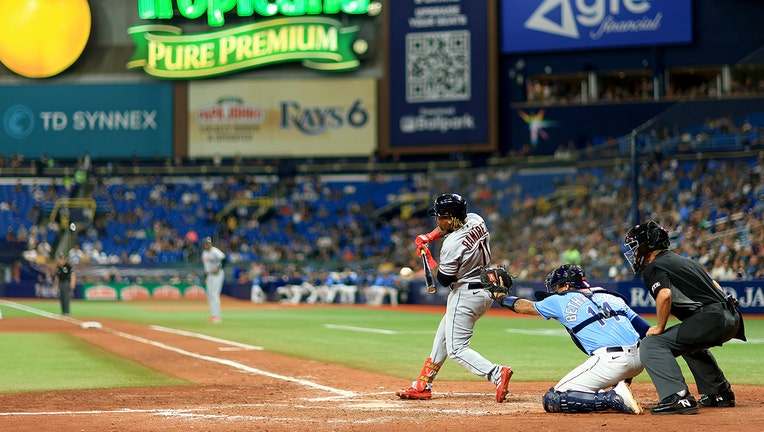 ST PETERSBURG, FLORIDA - JULY 29: Jose Ramirez #11 of the Cleveland Guardians hits in the seventh inning during a game against the Tampa Bay Rays at Tropicana Field on July 29, 2022 in St Petersburg, Florida. (Photo by Mike Ehrmann/Getty Images)

Bieber (5-6) iis just 2-3 in nine starts since June 3. He needed 26 pitches in the first, when Ji-Man Choi hit a run-scoring single. The Rays stranded the bases loaded when Christian Bethancourt struck out.

Emmanuel Clase pitched the ninth for his 22nd save in 24 chances, getting Bethancourt to ground into a game-ending double play. The Guardians won for the third time in four games.

Tampa Bay has lost six of seven and leads Cleveland by 3 1/2 games for the AL's third wild card. The homestand opener drew just 14,671,

Bieber, who has pitched six innings or more in 11 of his last 13 starts, gave up one run and five hits.

Guardians: RHP Aaron Civale, on the 15-day IL since July 14 with a sprained right wrist, is scheduled to pitch off a mound Sunday.

Rays: The neck strain that put RHP Matt Wisler on the 15-day IL Wednesday is minor, according to manager Kevin Cash. . . . . C Mike Zunino, who last played June 10 and is out for the season, had surgery on his left shoulder Thursday.

Rays RHP Corey Kluber (6-6, 3.91) will make the second start of his career Saturday against the team for which he won Cy Young Awards in 2014 and 2017. Kluber pitched six scoreless innings for the Yankees against Cleveland last Sept. 17, earning a win. RHP Zach Plesac (2-8, 4.09) will pitch for the Guardians.