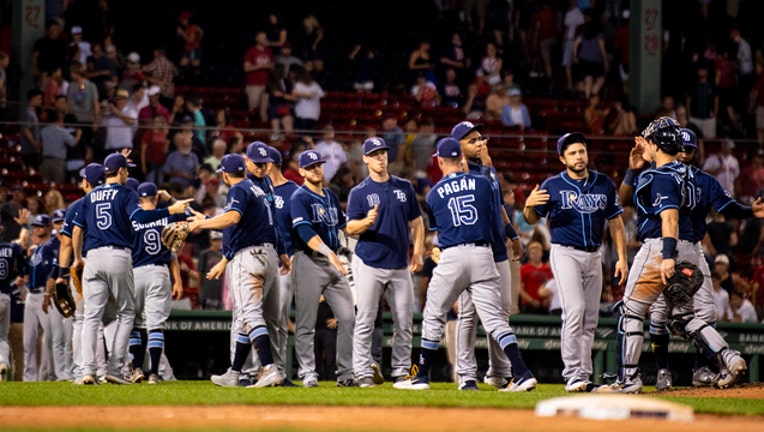 It's the second time Tampa Bay has swept a series of at least three games at Fenway Park. The Rays have won four straight and hold the AL's final wild card by a half-game over Oakland. Boston fell 3 1/2 games behind Tampa Bay.

The Red Sox lost their fourth straight and fell 10 1/2 games behind the AL East-leading Yankees a week after taking three of four against New York in Boston. The suddenly reeling Red Sox limp into a four-game weekend series in the Bronx at 59-51, all but out of contention for a fourth straight AL East title.

Tommy Pham had two RBI singles and Jesús Aguilar singled and scored twice in his debut for the Rays, who picked him up from Milwaukee in a trade before Wednesday's deadline. Eric Sogard also had two hits for the Rays.

McKay (2-1) got his second win in the majors, holding Boston to three runs and seven hits in 5 1/3 innings.

Xander Bogaerts went 4 for 4 with two homers, and Mookie Betts also homered for the Red Sox.

Boston was 1 for 11 with runners in scoring position and left seven on base. Red Sox starter Andrew Cashner walked five while allowing seven runs in 5 2/3 innings, and Boston's pitchers combined for eight walks and two wild pitches.

Cashner (10-6) had a 2-1 lead after Bogaerts' two-run homer in the first but fell apart quickly in the second. He walked Aguilar to start the inning, Sogard followed with a single and Zunino drew another walk to load the bases. Cashner walked in one run, Tampa Bay added another on a passed ball and Pham hit an RBI double to put the Rays up 4-2.

Cashner ran into more trouble in the sixth when Aguilar singled with one out, Sogard doubled to right and Zunino drew a walk to load the bases. Darwinzon Hernández replaced Cashner and threw a wild pitch that allowed Sogard to score from third and another pitch in the dirt that led to another run and a 7-3 lead for the Rays.

Red Sox: C Christian Vázquez (sore right knee) was out of the lineup after taking a wild pitch off his right knee in the seventh inning Wednesday night.

Rays: After a rare Friday night off, Tampa Bay hosts Miami in a two-game interleague series Saturday and Sunday. The Rays have yet to name a starter for Saturday against Marlins LHP Caleb Smith (7-4, 3.43 ERA).

Red Sox: LHP Eduardo Rodríguez (13-4, 4.13) gets the start Friday night in the opener of a four-game set against the first-place Yankees in New York. Rodríguez tied a career high for victories Saturday when the Red Sox beat the Yankees 9-5.