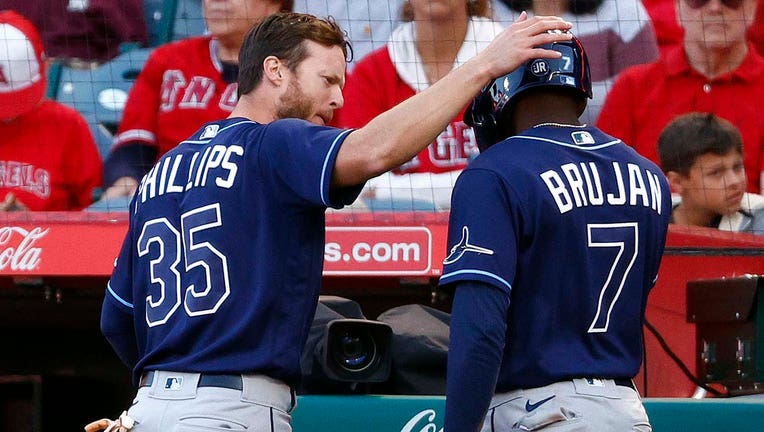 ANAHEIM, CALIFORNIA - MAY 11: Vidal Brujan #7 of the Tampa Bay Rays celebrates a run with Brett Phillips #35 against the Los Angeles Angels in the tenth inning at Angel Stadium of Anaheim on May 11, 2022 in Anaheim, California. (Photo by Ronald Marti

ANAHEIM, Calif. - Vidal Bruján got an RBI double leading off the 10th inning for his first hit of the season, and the Tampa Bay Rays rebounded from their no-hit loss with a 4-2 victory over the Los Angeles Angels on Wednesday night.

One night after rookie Reid Detmers

The game was a 1-0 pitchers' duel until the eighth, with Tampa Bay’s Shane McClanahan barely outpitching Shohei Ohtani. McClanahan had a career high-tying 11 strikeouts over seven innings of three-hit ball.

Ohtani yielded two hits and two walks over six sharp innings for the Angels, striking out five on 92 pitches in a strong follow-up at home to his seven dominant innings at Fenway Park last week.

Pinch-hitter Taylor Ward hit a tying two-run homer in the eighth for the Angels, whose three-game winning streak ended with just their fifth loss in 18 games. Los Angeles dropped to 21-12, failing to match the best 33-game start in franchise history.

Kevin Kiermaier hit a solo homer in the second for Tampa Bay. He scored from second base in the 10th when Bruján popped a double to left off Aaron Loup (0-2). Bruján then stole third and scored on pinch-hitter Harold Ramirez’s single.

Brooks Raley walked pinch-hitter Mike Trout with one out in the 10th, but Ward grounded into a fielder's choice before Raley struck out Brandon Marsh with two runners on to wrap up his third save.

Both starting pitchers thrived in Angel Stadium’s late-afternoon shadows, which often bedevil batters tracking the ball through sun and shade between the mound and home plate.

Ohtani also got an infield hit and stole second in the fourth inning.

Tampa Bay's Taylor Walls singled, stole second, went to third on a bunt and scored on Yandy Diaz’s groundout in the eighth.

But with Tyler Wade on first in the bottom half of the eighth, Ward came off the bench for his first action since Sunday and promptly drilled a two-run homer to left off Andrew Kittredge.

Ward’s seventh homer of the season — the Angels’ first pinch-hit homer since September 2019 — was the latest feat in the late-blooming outfielder’s increasingly impressive campaign.

Rays: Manuel Margot sat out with a right hamstring injury, but the slugger could have played, manager Kevin Cash said. ... Wander Franco was Tampa Bay's designated hitter to give him extra rest.

Rays: After a day off, Drew Rasmussen (3-1, 2.89 ERA) is expected to take the mound at home for a series opener against Kevin Gausman and Toronto.

Angels: After a day off, Los Angeles visits Oakland on Friday for the first of four games in three days. The Halos haven't announced a starter.